The Nubees team is back on the local lanes every Thursday morning for 13 weeks of summer league play.  Like last year, I bring my favorite Old Lady Friend, Edna, along for good luck and positive juju. Boy, the last three weeks I have needed luck.  Since starting in early June, my only goal was to break 100 each game and that was difficult, even when I whispered "arrow prayers" before I tossed the ten pounder. CLUNK!  Many, many times my ball met the gutter before the pins. My handicap has toggled between 93 and 78.
NOW, do you understand that I suck at bowling?
However, Thursday mornings are consistent fun to spend time with Overboard in matching shirts she bought our team when she attended the National Female Bowling Championships in May. Overboard is hardcore with this bowling gig, and Thursdays never disappoint laughing with all the sweet ladies at Harley's Bowling Alley. It's definitely a worthwhile-weekly-women-only workout, despite my lack of flair, skill and points. 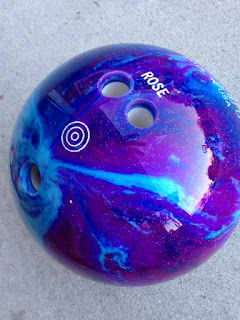 But today, something was different.
There was a new variable in my personal bowling equation.
Not only was  our summer league celebrating five July birthdays, with cake, decorations and celebratory cheer, but I hauled along a new friend... a ten-pound-round friend to call my very own until the day I die. My very-first-ever bowling ball. She is swirly aqua, purple and dark blue with silver sparkles flowing throughout. She looks like a purply cosmic planet named "Rose" and her holes were custom made to fit my pudgy-short-fingers. It felt like wearing a glove that has a bowling ball wrapped around it. ﻿﻿
Being that my Purply Cosmic Planet Rose Ball was an bowling virgin, it was exciting to AT LAST introduce shiny her to the greasy alley and filthy pins that begged her to "bring it."
Planet Rose showed no fear facing those scratched-worn pins. This young-beautiful-thing slammed into those old-timers and it felt like, for the first time in my bowling history, the planets and stars aligned, the skies opened up and angelic chants were heard on lanes five and six. 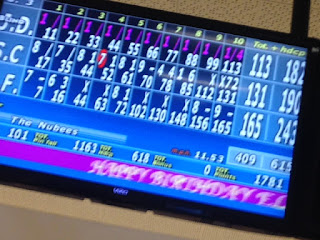 I did fling a couple gutter balls this morning and made
a few signature bad throws,
but I rang up a score of 165 in our third game!
165 PEOPLE! That's a 243 with my outrageous handicap!
Yes, five strikes in game tres, which included a "turkey"
(that's three strikes in a row - gobble, gobble, gobble).
This is total abnormal Unicycle Rose bowling behavior!
Can you say,
"Let the Good Times Roll?" 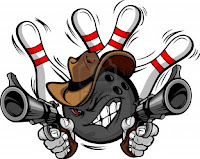 It was such a natural high. I love those rare happenings:)
Thank you Purply Cosmic Rose Ball for the first of (hopefully)
many consecutive strikes and magical summer memories.
Posted by UnicycleRose at 9:33 PM