Last week I picked up Daniel from school and we headed straight up the coast. Arriving at his favorite surf spot, my car thermometer registered 84 degrees outside. Yes, 84! 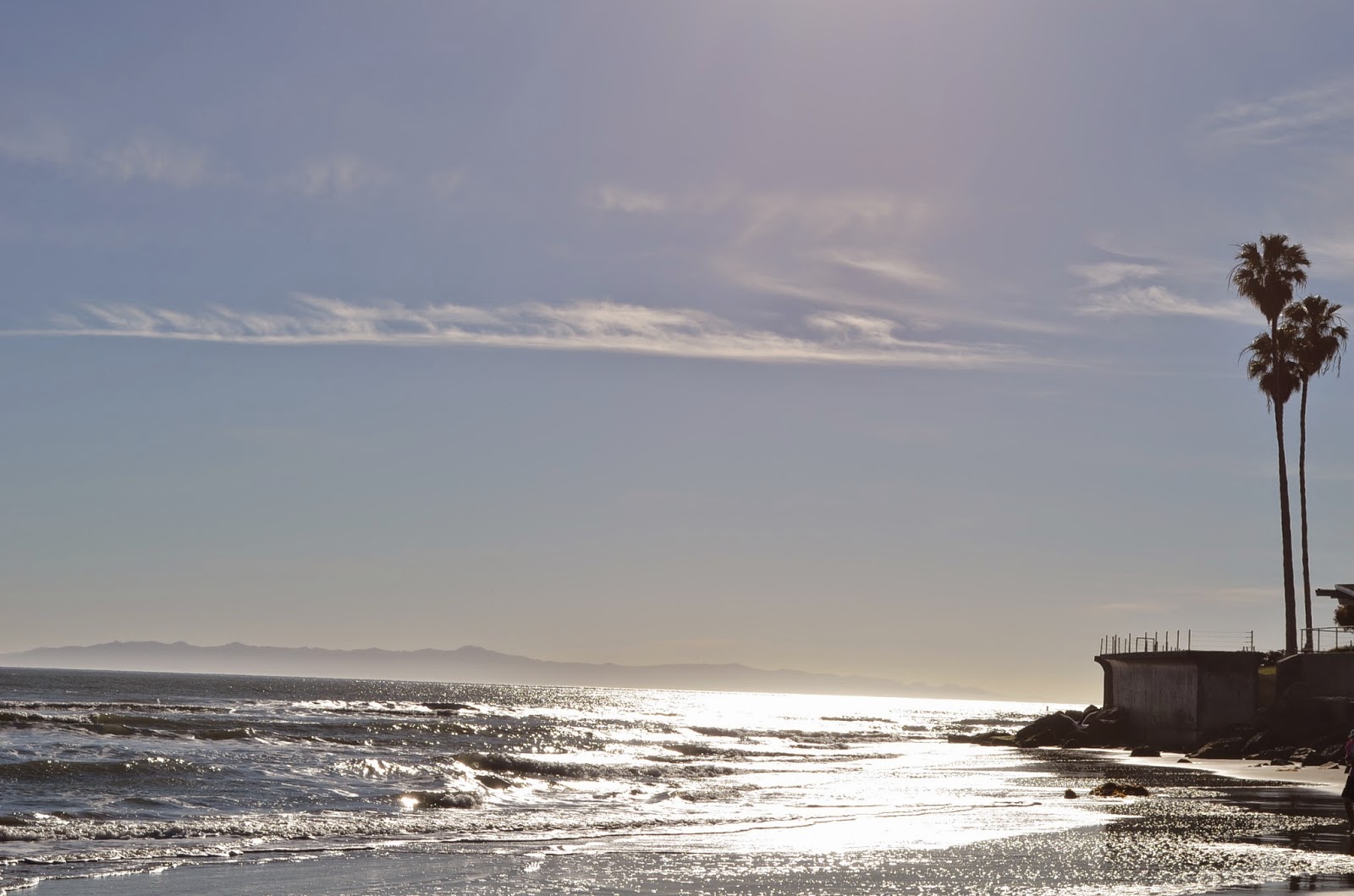 It was gorgeous out and so clear you could almost touch the Channel Islands that were miles from shore. I settled into my sandy spot while Daniel headed out to ride the waves. I shlumped, realizing I left my phone in the car and debated climbing the rocks back up to the street, walk down the road and retrieve it. I decided not to. Instead, I soaked up my surroundings. 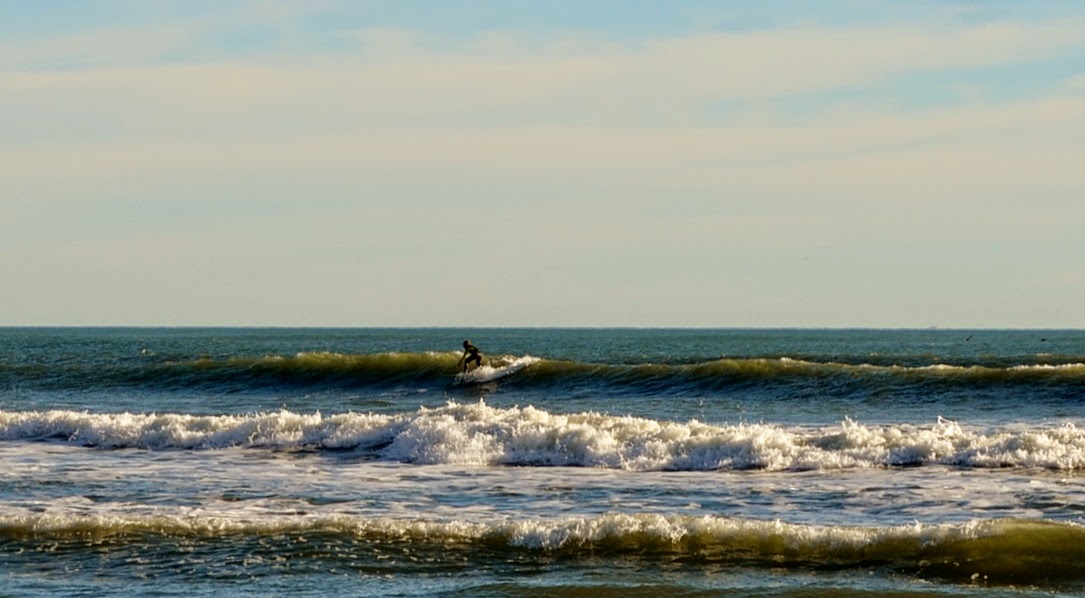 Standing at the shore I met a woman with two small children from Canada. She arrived in Southern California on Christmas Eve and was staying here to escape the freezing Canadian winter. She mentioned it was negative thirty degrees in her hometown!
Yikes ... NEGATIVE THIRTY!
Tanned, wearing her board shorts, baby slung on her hips, she sighed and said "California has amazing winters."
Why ... yes we do!
Perhaps I don't always appreciate that. I miss me some chilly weather that requires heavy coats, umbrellas and mittens. While the northeastern half of the USA is frozen solid, with record breaking snowfall, out  west it felt like July. 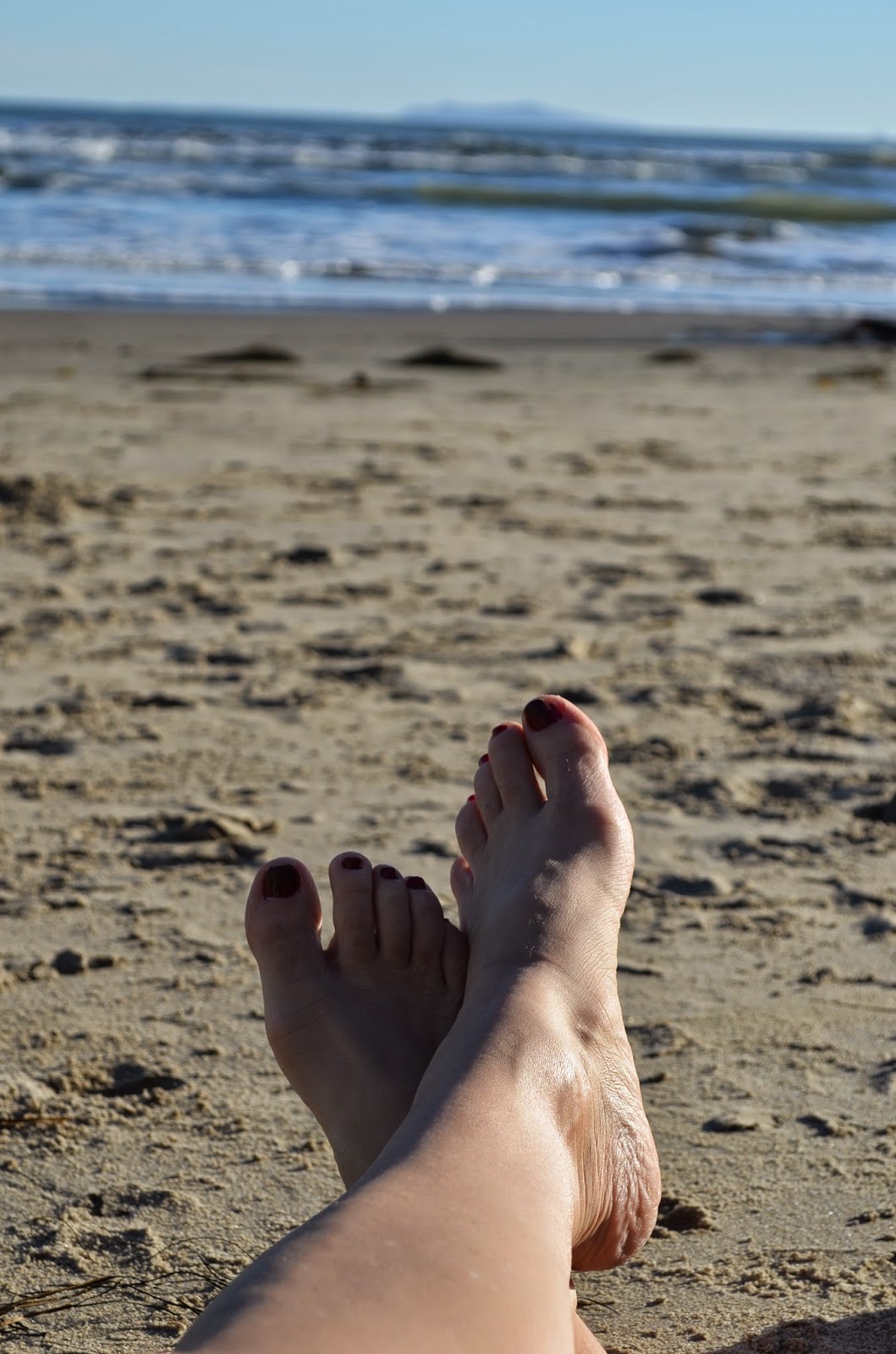 As I snapped photos of Daniel catching long wave rides on "The Pickle" (his green surfboard) I looked around at the beach life around me while remembering the images on the nightly news with cities covered in white with closed subways, snow days for schools and bundled up folks shoveling snow in frigid cold.  Lately, every night I watch the news, I am thankful I don't live with snowstorms ... especially one after another, after another. I stepped forward and wet my feet in what I considered the "freezing" Pacific Ocean. 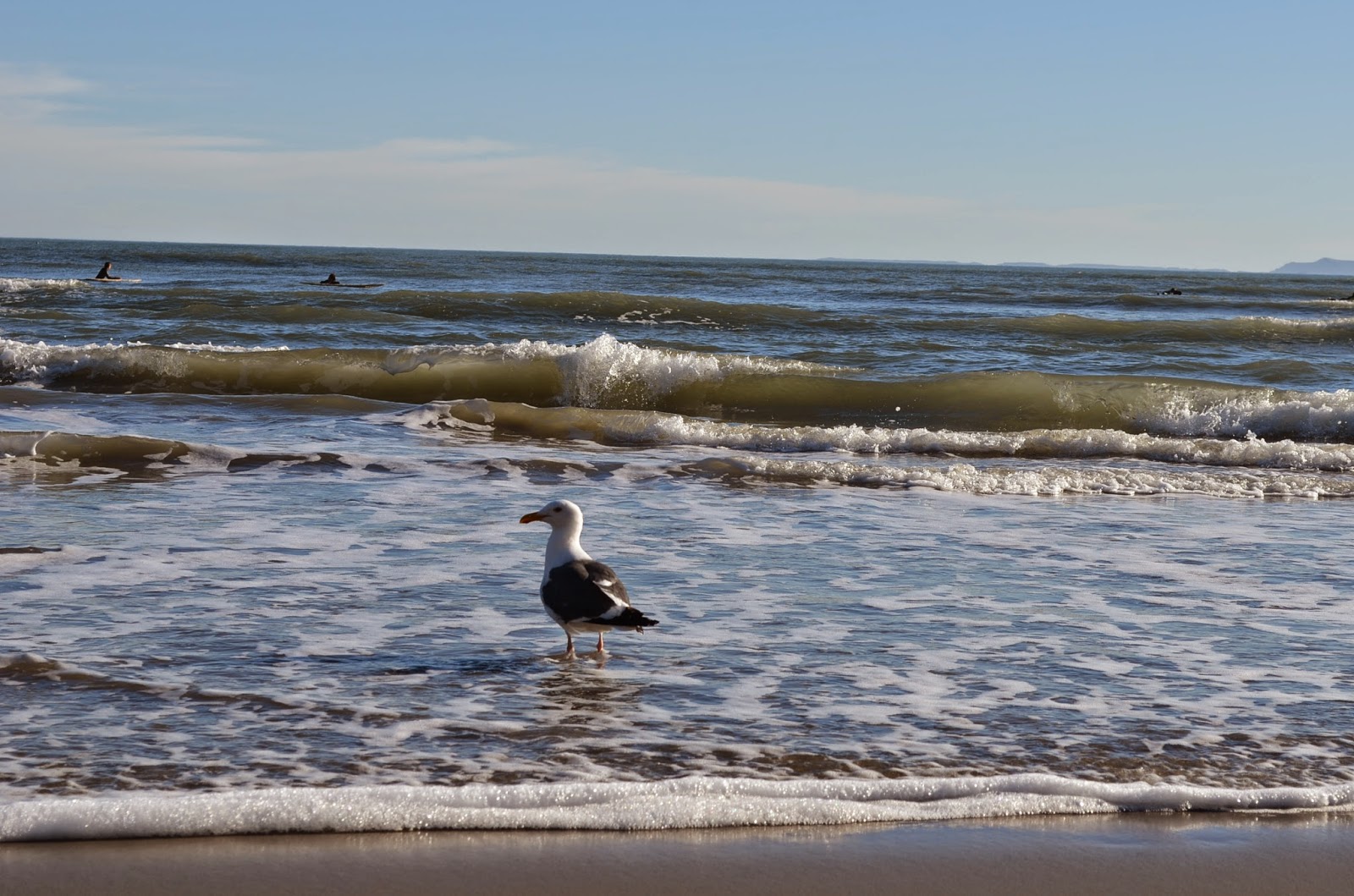 I looked around as I thought about this blessed California winter.
The little kids on the beach were not in snowsuits, but wet suits as they jumped in the waves swinging around ropes of seaweed. There weren't husky dogs prodding away in the snow, or birds gliding though the cold air. 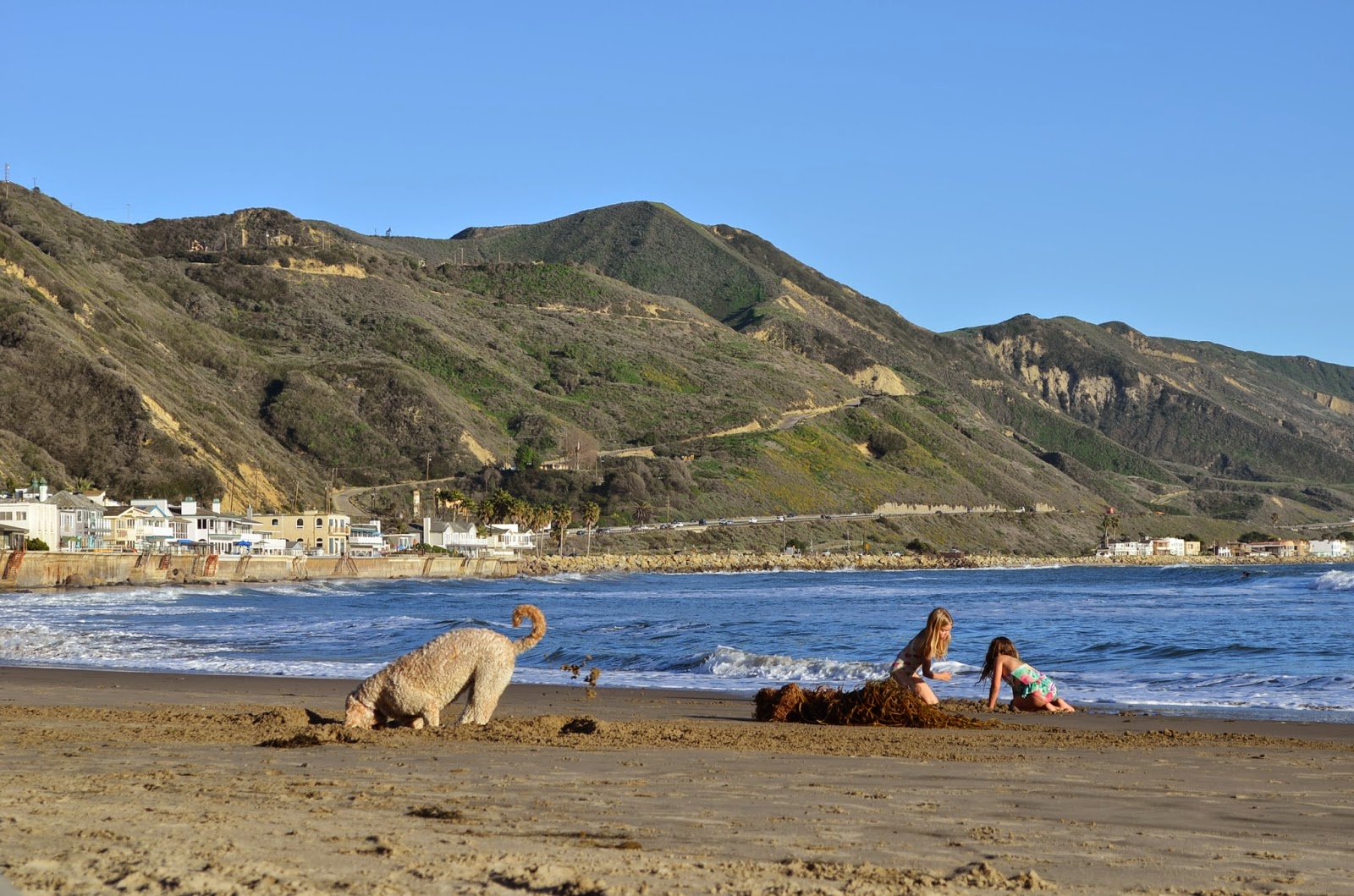 No, this California winter day hosted seagulls poking around on the shore and a  labradoodle down the beach digging in wet sand.The little ones to my left were not building snow men, but sand castles and there weren't any snow boots, only bare feet dancing on the sand.
All the while, out in the ocean, Daniel surfed "sledding" down the waves under warm sunny skies. 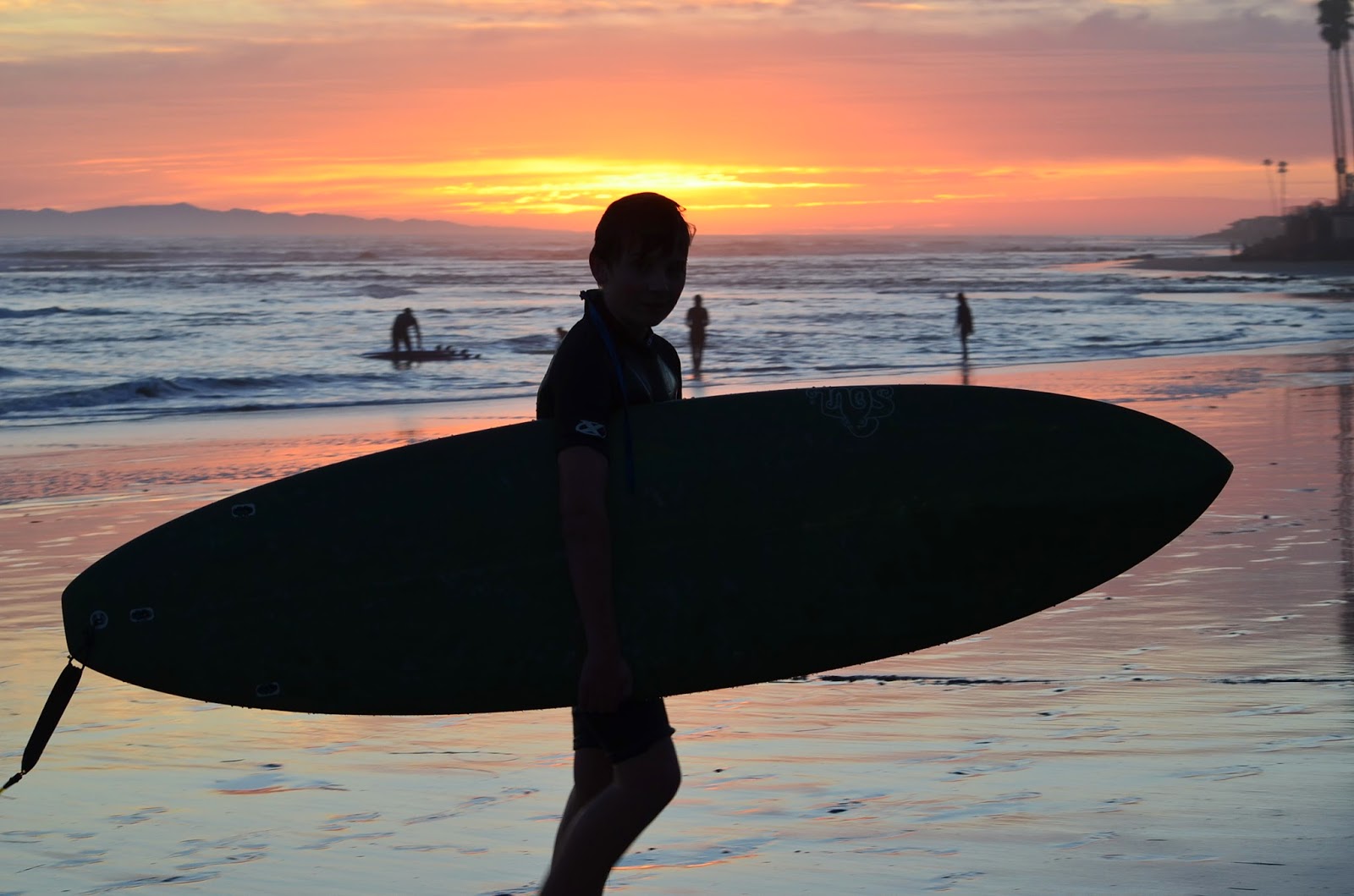 Appreciating the life around me, I sighed and agreed with the Canadian lady I'd met earlier,
"Yes, California has amazing winters."
Posted by UnicycleRose at 8:12 AM