Daniel's "cast removal" day arrived!
We  clicked our heels at the thought of it!
He healed in such an overly-amazing way the doctor was not going to require he wear a splint. After discussion of Daniel's skateboarding goals, it was agreed he wear extra support when active. It's unbelievable how his arm (with the help of metal pins) healed and is stronger than ever before. It's bionic :)
After that smelly-green-cocoon was cut off his arm, we walked on the beach with Miss Piggy and Lui. Santa Barbara is spectacular any time of year. 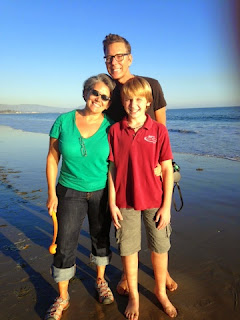 On the unicycle front?
Yesterday, with soreness lifted, I hopped on. About mile, two I reached behind to grab my water bottle and it was gone! I should have just "let it go," but it wasn't any old water, but Coconut Water. Did you know that key nutrients in Coconut Water include Lauric acid, Chloride, and Iron, as well as important electrolytes such as Potassium, Magnesium, Calcium, Sodium, and Phosphorous? In fact, the potassium content in Coconut Water is close to twice the amount in a banana!
And, when ingesting coconut water,
the taste bursts visions of Maui.
Bonus!
Now do you understand why I had to make a U-turn and find my coconut water?
FYI ... a Unicycle-U-turn is ... hop off Blanche, turn wheel in other direction, then hop back on without falling on face. It's nothing close to rocket science or juggling tennis balls! Easy-peasy!
Then, peddling in the opposite direction, I back-tracked the extra mile to retrieve my water bottle off the street!  I flipped another Unicycle-U-Turn and I continued on  ... making an unexpected five-mile ride in the middle of a very hot Southern California Fall Day. Sweat dripping and flushed cheeks reminded me that this wasn't easy.
THEN!
The bottle-of-coconut-water-detour threw off my timing and I was passing an elementary school as it was getting out.
FARUMPH!
I try to avoid that sort of thing, makes me nervous. Anyways, kids love seeing a unicycle in action. I smiled and rode Blanche past the children as they pointed in awe. It made me feel like a celebrity or leper.
I carefully waved back like a prom queen and kept "the balance."

Today some milestones were made!
1.Daniel's cast-less arm can breath! Ten weeks later, it is free!
2. Unexpectedly, I rode Blanche five miles. Only accomplished as an indirect benefit of lost coconut water!

I would like to thank coconuts and arm
casts for making this post possible :)
Posted by UnicycleRose at 10:19 PM