Cinco arrived on Sunday for a three week stay. Her parents are traipsing through Italy visiting friends and relatives. She seems to be enjoying our backyard and playing with her Wiener-dog Cousins. They get along great, except Cinco can run faster and jump over them with ease. That has to be frustrating for my stubby-legged doggies. I put Cinco's food on a counter height chair that only she can jump up on. That eliminates the problem of Sara and Goldie eating her food, which they would devour, the little piglets. 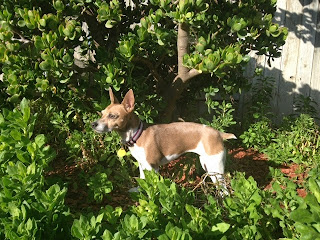 I had some fun with the three of them yesterday,
creating a photo session. All three were cooperating, sitting still and close.  I had to seize the moment. When I showed Daniel the many great shots, he looked at me and said, "How bored are you?"
I had to laugh and think of my answer to that one. 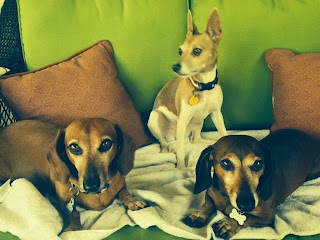 Daniel's broken wing is healing nicely, however, he is  still behind in school work and aching to visit the beach. This broken arm experience is his test in patience. 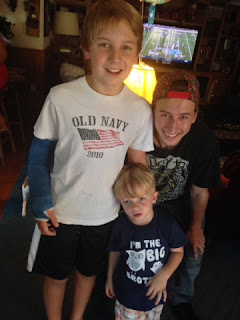 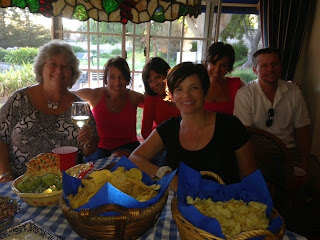 We played a game to guess the sex of her baby due in March. Let's just say I was wrong.

I also managed to survive through week 2 of our NFL Suicide pool.  Of the 64 enteries, only 28 are left! The many upsets the first two weeks eliminated over half the people! Teckie and are I still "in" ... watching some football on Sunday and keeping our fingers crossed. We can both think of one hundred different ways to spend $1600! I am sure you can too. 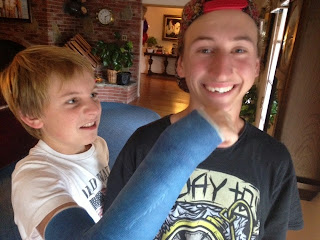 Another dramatic highlight of the weekend was that Lucas's front composite tooth fell apart. He has had it attached for about seven years; it had a good run. So, he looked like a hillbilly for a day, then the dentist squeezed him in for a repair. It stinks having to deal with a chipped front tooth for the rest of his life. However, it's not "open heart surgery" or even close to "broken bone pins." So please note this is not a complaint, just a report :)
It is a blessing to have dental insurance! Here he is sporting the new tooth after an hour "in the chair." In about two years, when he is done growing, he will have a permanent crown made. Until then, he better not chew on another Popsicle stick!
Posted by UnicycleRose at 5:48 PM