The more "hands" the better. Literally.

Uncle Lui and Miss Piggy cooked us a delicious dinner with their "loving hands" the night before surgery. Then Lui took Daniel for a night walk on the beach, which he LOVED. I have to "hand it" to those two; they are consistently fun and kooky. 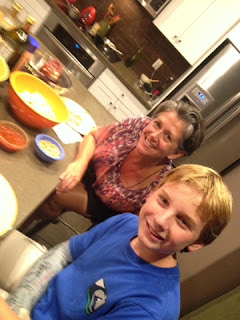 The next morn we popped (that might be to exuberant of an verb for 5AM) out of bed. Dan had to shower and Miss Piggy gave me the "hand off" of a toasted bagel and coffee. She was so helpful! It's true that "many hands make light work."

We headed to Summit Surgery Center, arriving at 6AM. This surgery place was ten minutes from Miss Piggy's house. How "handy" is that? The anesthesiologist told me that there was a four-hour delay on the 101 freeway going north. Had we NOT slept at their place in Santa Barbara, and drove from our hometown, we would have "hands down" missed surgery. No bueno. I'm thankful for the "hand of God" putting us in the right place at the right time.
Daniel was at the "doctor's hand" for only 45 minutes! That's all he needed to reset his bones and put two pins in to hold it all in place. When  Dan came out of the anesthesia his pain level was "out of hand" so they gave him some heavy drugs that worked beautifully "handling" the pain. I stayed with him, holding his "free hand" then we headed home a couple hours later.

Now, we wait four weeks to have this cast removed and pins pulled out. Then, a shorter cast will be put on. But, let me slow down ... let's  "get a handle" on this jumbo-cast-with-pins-in first!

All day yesterday, he was on the painkillers. He hurt. Finally at 8PM, he wanted something to eat. Since I am his "right hand man" I  "man-handled" some salami and turkey, creating his favorite sandwich. The hungry kid ate "hand over fist" devouring his first meal of the day.
The last two days he's had many visitors. His favorite chips, cupcakes, an Oreo Mc Flurry, hugs, and a bag of Almond Joy were received "at the hands" of supportive friends and family. He was really touched that folks thought of him. I have to "hand it" to Cutie Pie for giving him a gift card to In-N-Out which is, "hands down" his favorite place to eat. I was feeling the love because Overboard was able to "lend a hand" and pick up his medications and some ginger ale. My life would rage "out of hand" without her "helping hands."
I
Today we laid low, but did make one trip out to Target, then "handed over" the gift card at In-and-Out Burger for a late lunch. I've only "handed" him Advil  today, which is awesome because he goes back to school tomorrow. Being out and about today made his "hand" and fingers swell up like fat sausages. The good doctor wasn't kidding when he told me "first hand" to keep his hand UP!
That brings you, the reader, to "the time at hand" -- 7:10PM on Tuesday. Dan is sitting on the patio and has "set his hand" to catching up on homework.  His nose is buried in the book Johnny Tremain ("one handed") and Goldie is parked on his lap. All the while, he keeps his broken "hand up" as instructed.

It has been a blessing to love and nurse my son "with my own two hands." But "on the other hand" it will be nice to get back to real life tomorrow; with Daniel's "hand up" of course!
SIDENOTE:
Um... I hope you can "handle" my corny side...
I've had "too much time on my hands"
-- Does it show?
Posted by UnicycleRose at 8:16 PM