We started off this Labor Day and new month with a sausage-egg scramble with bell pepper and red onion. My family devours the stuff. I actually had to buy eggs for the first time in years. With all the quiches and baking this past week, our chickens couldn't meet the demand.

Currently, Teckie is helping Lucas with some college application stuff before he leaves to see Jack Johnson in concert at the Santa Barbara Bowl.
Lucky.
Otherwise, today is a lazy day.
No "labor" going on here. Well... there was yesterday in that it was our BIRTH-day. Daniel officially turned 14 and I celebrated the day I gave birth, as in labor. It's a stretch I know, but I think mothers should celebrate on their kid's birthdays, because it is, literally, their BIRTH-day too. Pushing out a baby is no easy task people, and, if I remember correctly it hurts, even with help from Ms. Epi Dural.
It's work, that's why it's called "labor." Right?
Thankfully, the memory of pain vanishes once that precious bundle is placed in your arms. 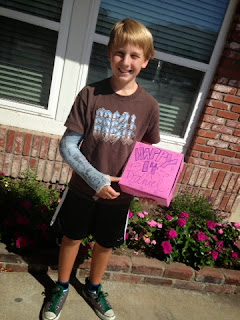 Daniel's birthday morning was kicked off with a box of doughnuts welcoming us home from church.  Miss Piggy and Lui were passing through town and thoughtfully delivered some "fat pills" as my family calls them.  Miss Piggy wrote "Birthday Donut Tips" on the box sides.  One was to "treat yourself to something special because this is YOUR DAY!" 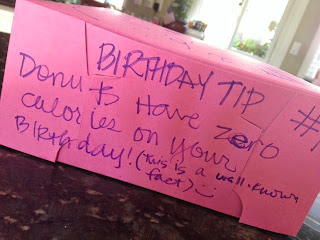 My fav was the "well known fact" that donuts on your birthday contain zero calories. I immediately chowed down the pink cake doughnut.
Me gusta.

In the afternoon we ate at a favorite Mexican restaurant where they surprised him with "Happy Birthday" sung in Spanish, a ginormous sombrero and plate of flan with a candle in it. Mid-singing the hombre forced a big spoonful into his mouth; leaving his shnoz covered in whip cream and face in laughter. 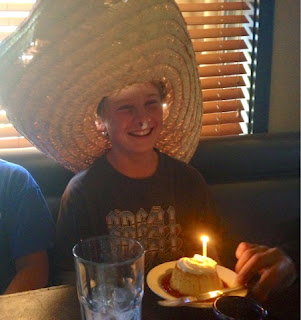 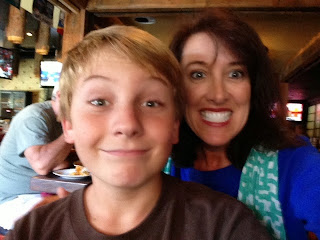 Here we are celebrating his Cumpleanos recalling that wonderful day he flew out the shoot and into this world. A day that I will never forget, as it was a life-changer, and only for the better.
We let Daniel steer the day and it was definitely custom-made just like that big blue cast he's still lugging around.
He wanted to end his birthday watching the sunset.
That is "so Dan."
The four of us headed to the beach and soaked up God's amazing artwork. We spotted many sea lions swimming around with their long whiskers and pointy snouts poking out of the ocean. We agreed the sea lions looked like our dachshunds. Or, maybe we were just missing the Wiener Sisters? That happens often around here. 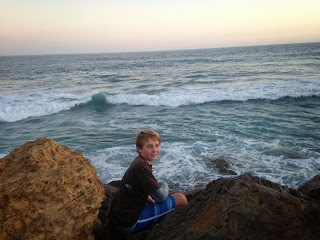 Later that night,  he chose to watch the latest Spiderman 2 movie. How many times can they remake that one? I'll never know. Daniel's birthday weekend caught up with him and he was asleep half way through the movie he wanted to watch.
Posted by UnicycleRose at 1:54 PM