Fourteen Is A Hit! 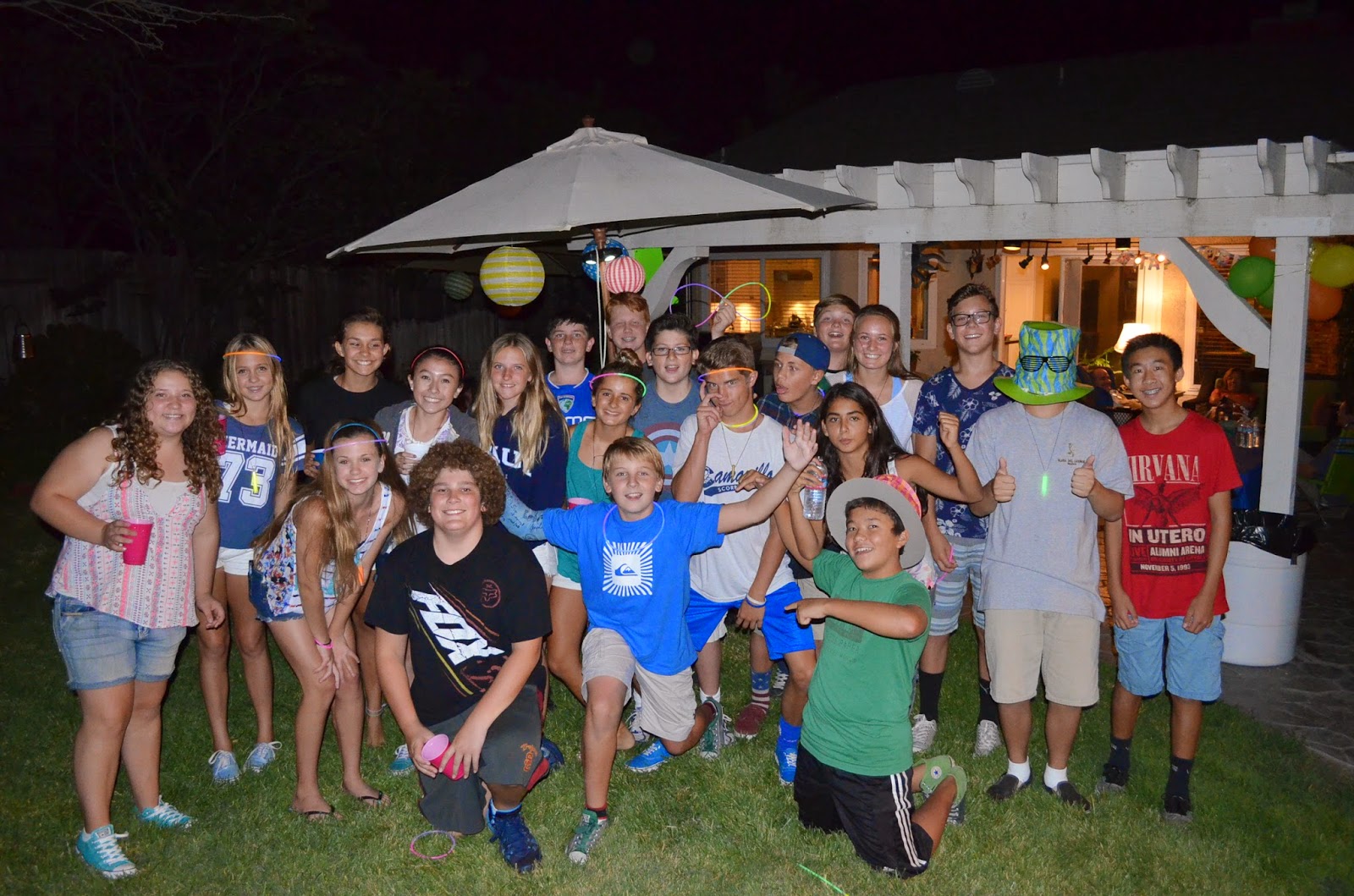 Last night we celebrated fourteen years of Daniel. It was a big shin-dig, as we invited his class and twenty-two attended. This is a special group of kids, in that many of them have been together since kindergarten. This is their eighth grade year, and last year ALL together.  I was hoping to make this birthday party "A Hit!" 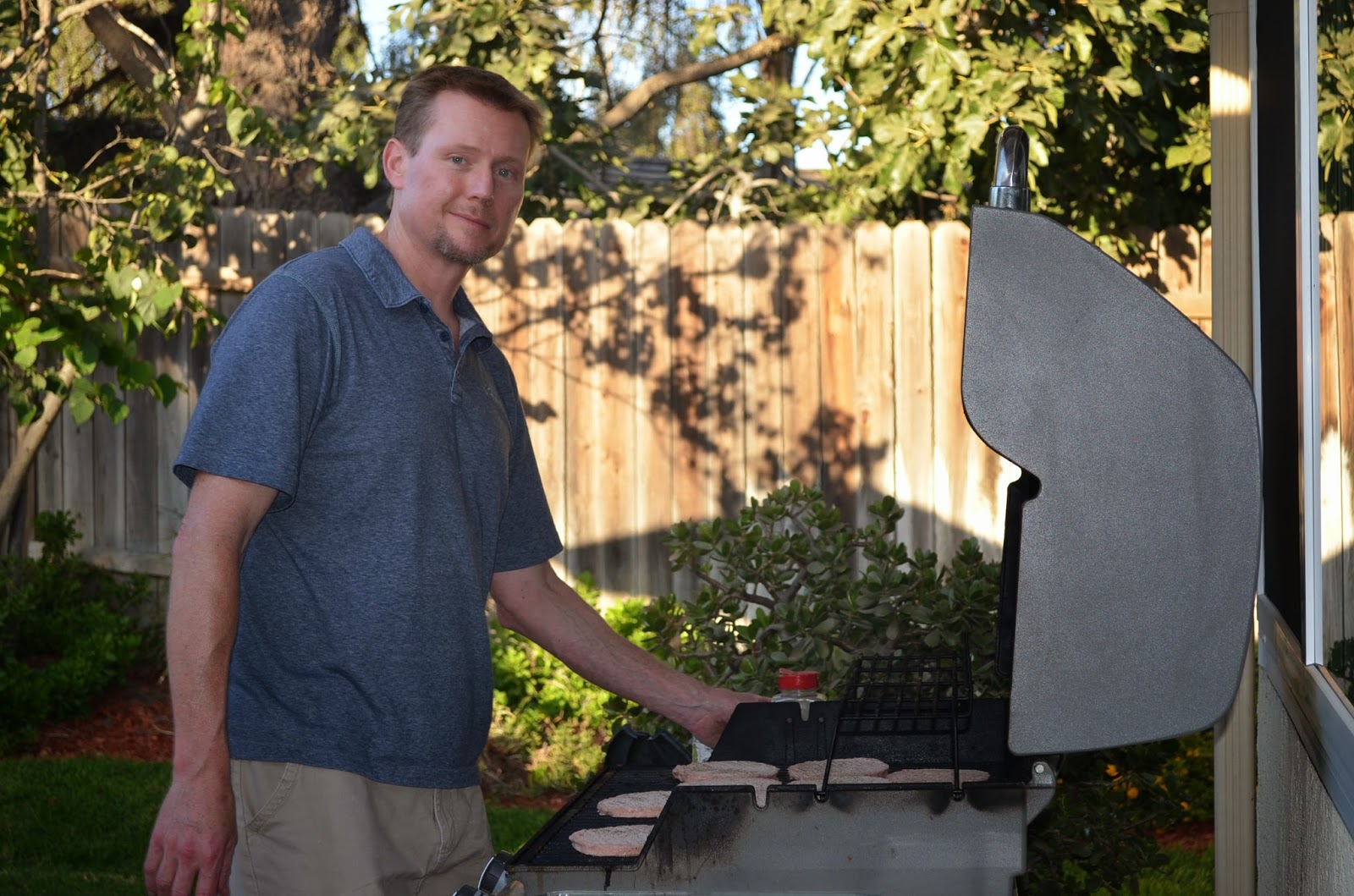 Luckily, Teckie had the day off so he was around for heavy lifting. Remember that many hands make light work. He was on the grill cooking them burgers and weenies. He did an excellent job, dinner was "A Hit!" :) 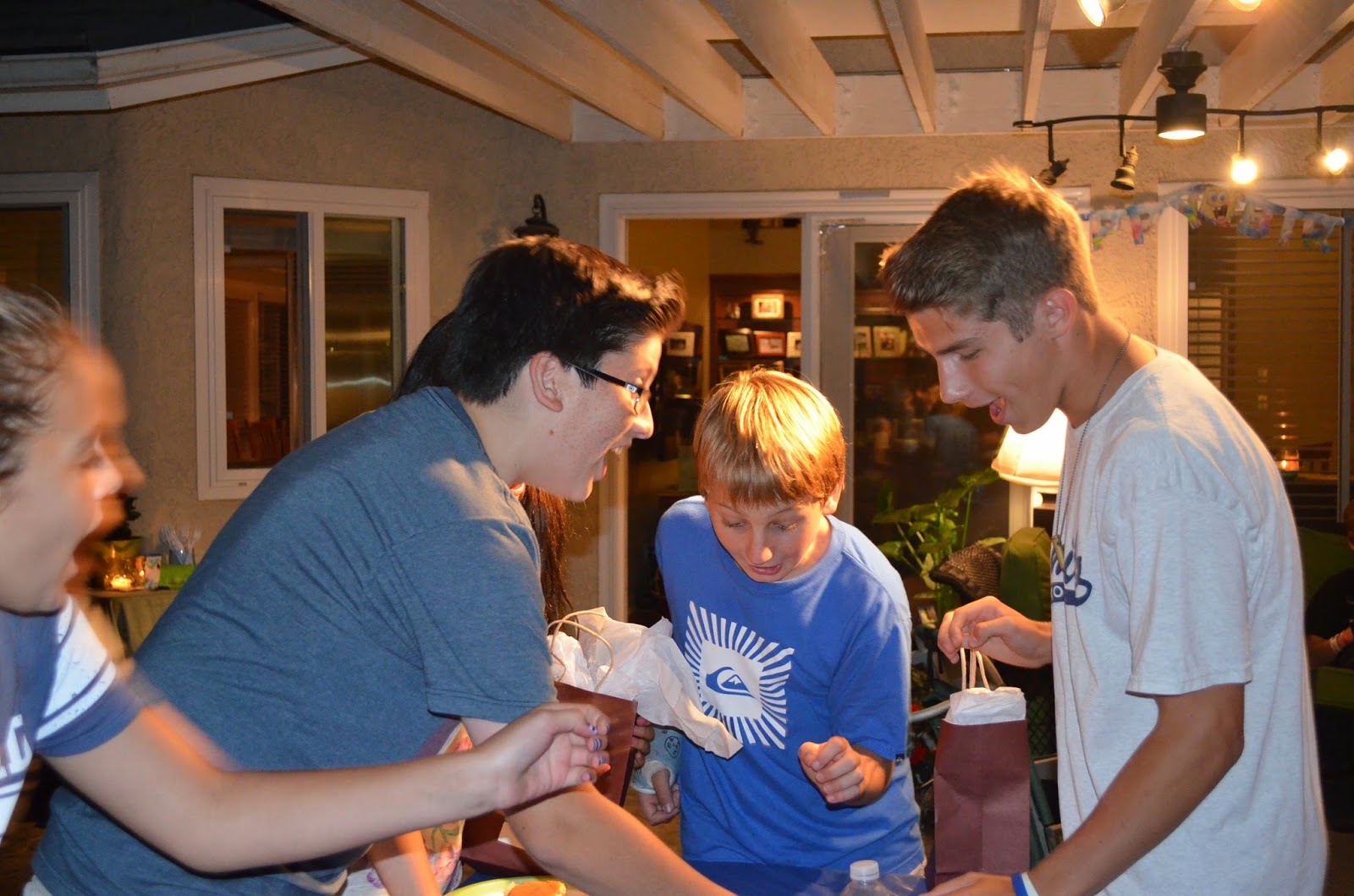 We played a couple games and both were "Hits."
The first was a traditional scavenger hunt mixed with a photo scavenger hunt.  This is when each team has to create certain things and take cell phone photos of them. For example,  a team picture on the slide, or a photo of something in the sky, or photo of something starting with the letter "F. They had 35 minutes to comb the neighborhood collecting the usual paper clip, character band-aid, and penny from the year 2000, among other things. Lucas was the leader of the winning team, overseeing six of Daniel's friends to the big win of glow sticks, that were "A Hit", especially at night! 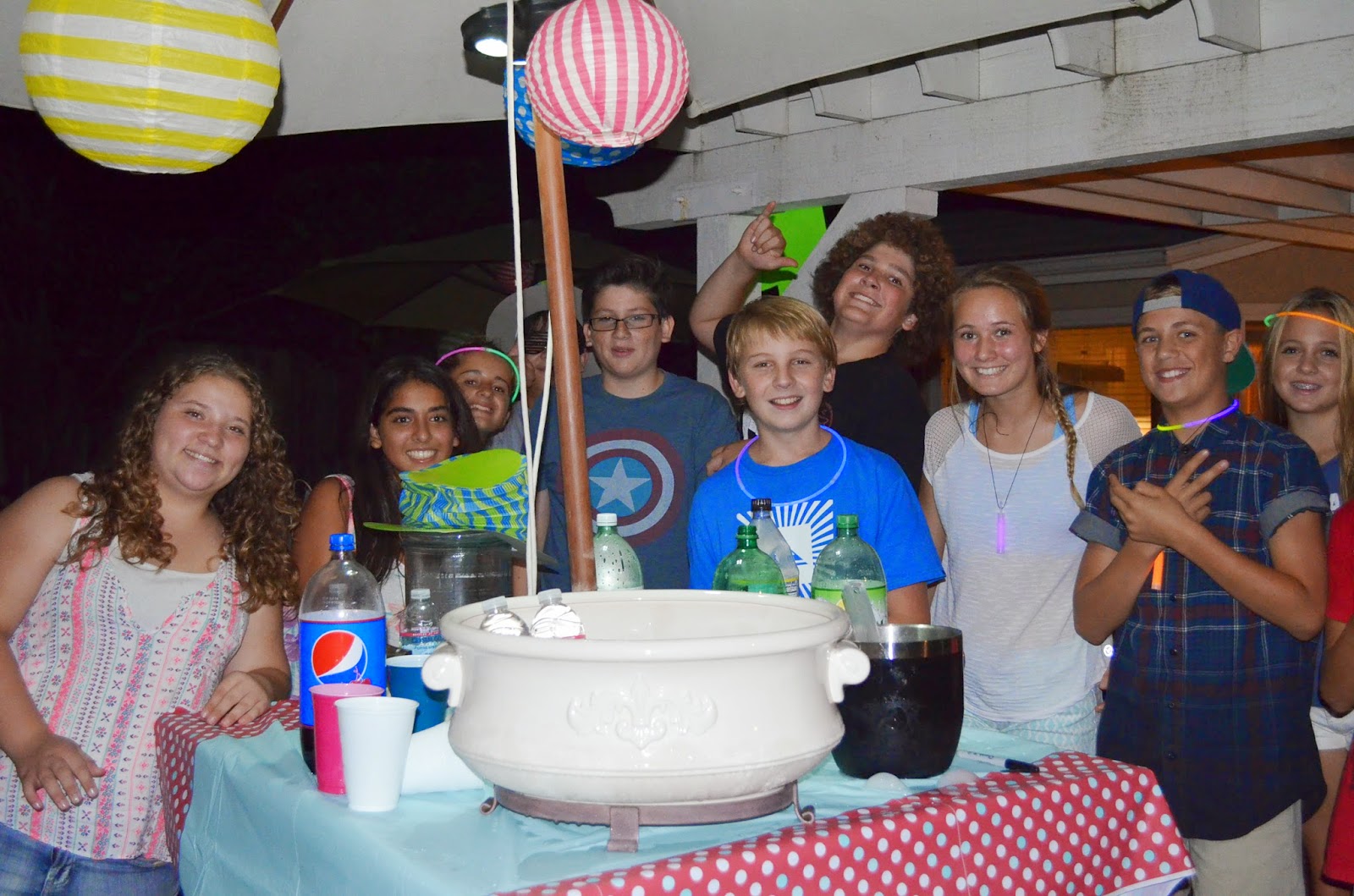 The other game was the Pie-Tin dice game. This is when kids are divided into four and stand around a table, rolling two dice in a pie-tin, hoping to get doubles of any number. If they do, they get to grab a wrapped prize from the table and once all the prizes are gone, they start stealing from one another until ten minutes is up. Whomever ends up with an unopened prize gets to keep it. This game results in ten minutes of loud energy and frantic dice rolling. They LOVED it! 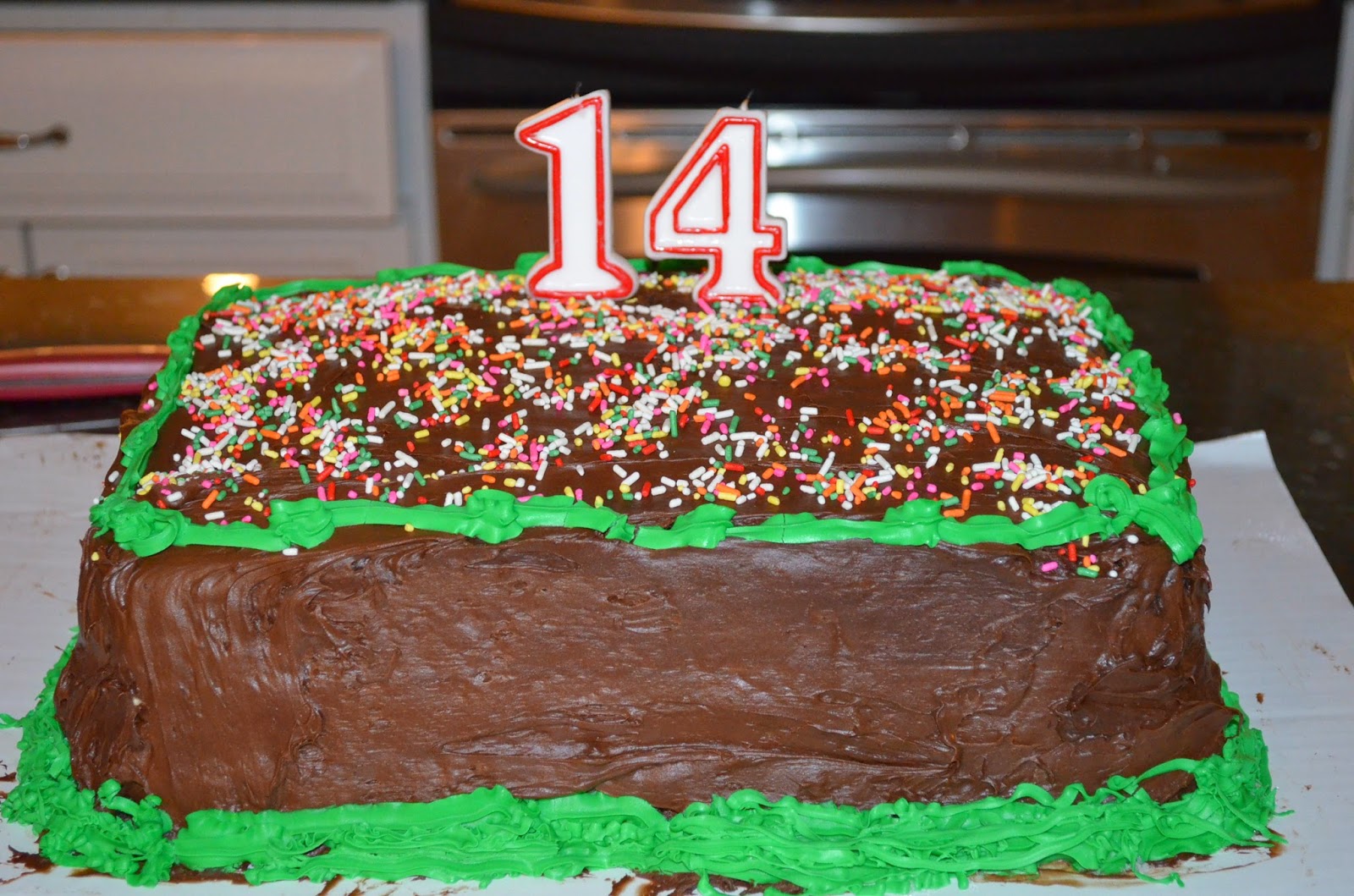 Daniel requested a chocolate cake with mint-chip ice cream. This was created with two 11x13 chocolate fudge cakes with two gallons of ice cream in the middle. It was in the heavy weight division of ice cream cakes! It had to be, as we had many mouths to feed.  Thankfully, we had a few pieces left of this monster. Again, ice cream cakes are always  "A Hit" with kids. And adults ... I just finished a piece and it's still morning (guilty as charged). 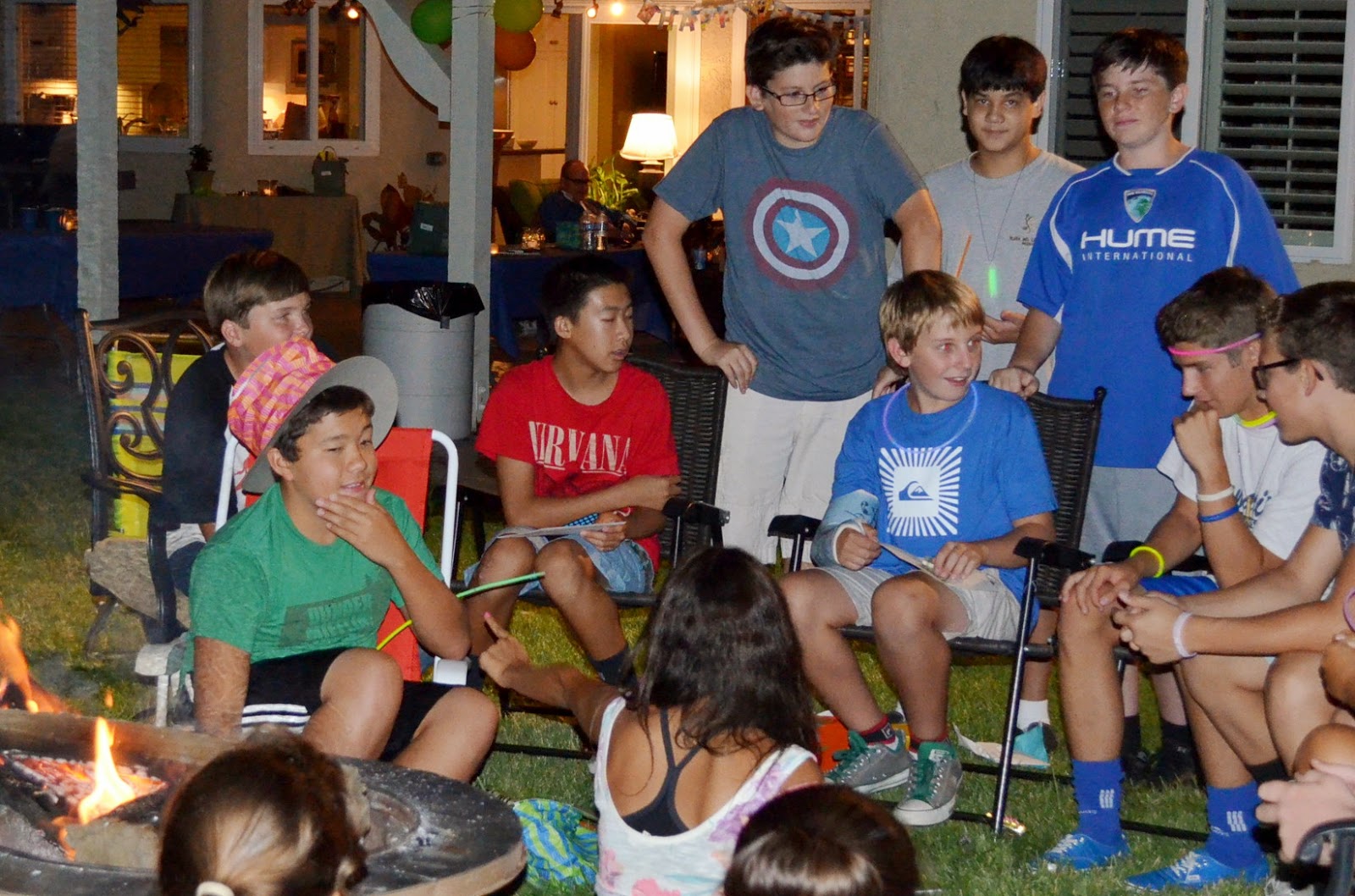 The  night wrapped up with a bonfire with chairs wrapped around the blaze. We left them alone and they coordinated games on their own until it was time for presents to be opened. 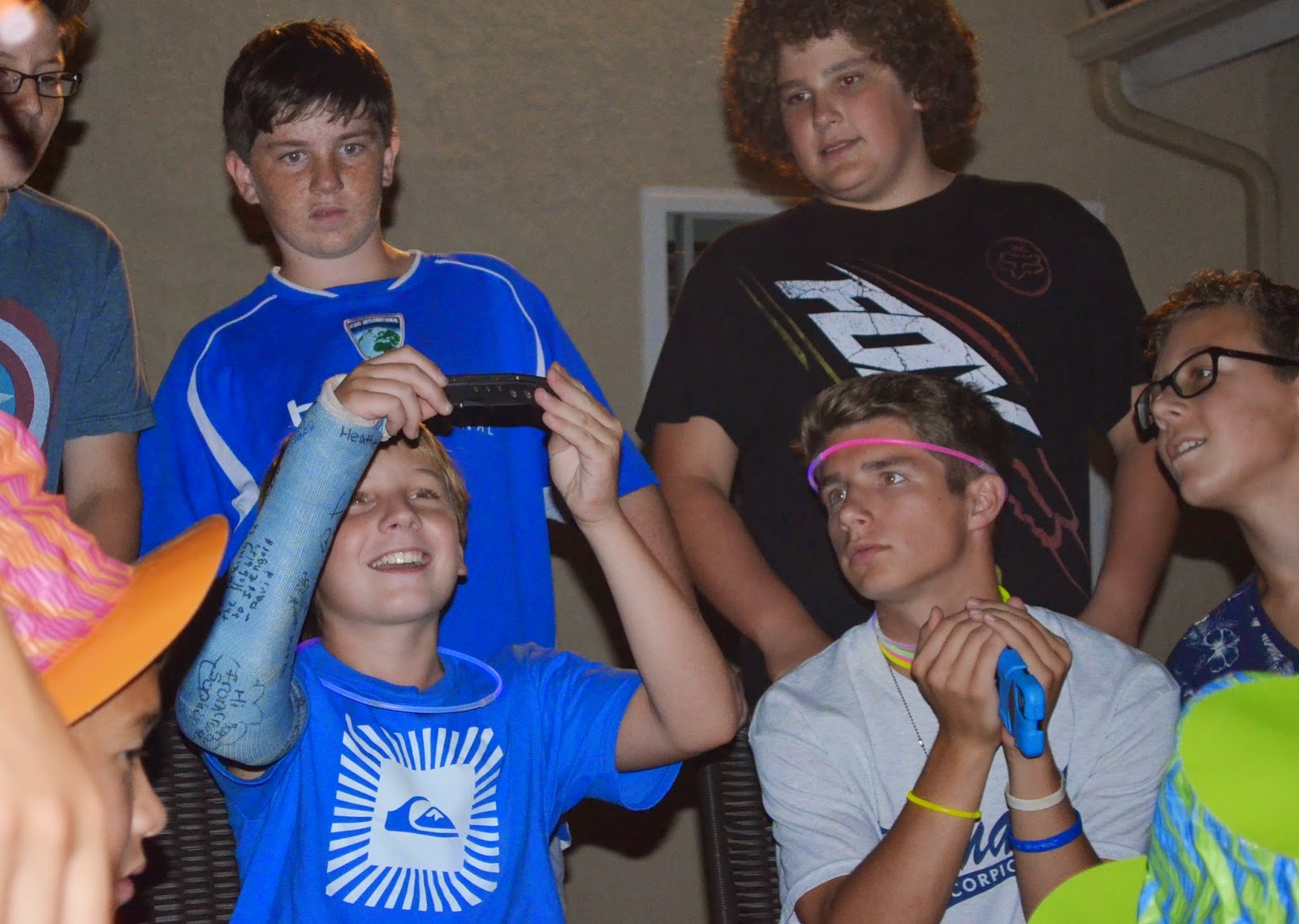 One of Daniel's friends gave him a pocket knife... of all the things. Like, Daniel needs ANOTHER pocket knife. But, when you are fourteen they're cool and the more blades the better. You can see how mesmerizing this gift was, all the boys staring in a trance-like state. Four hours later, the party ended and we practically had to kick kids out. Many had texted their parents and asked them to come later to pick up.  Everyone was getting along so well! Thankfully, the parents didn't do as they asked and I am thankful for that. We had ALOT of clean up to do and it had been a long day of preparing.
And, a long day of fun. 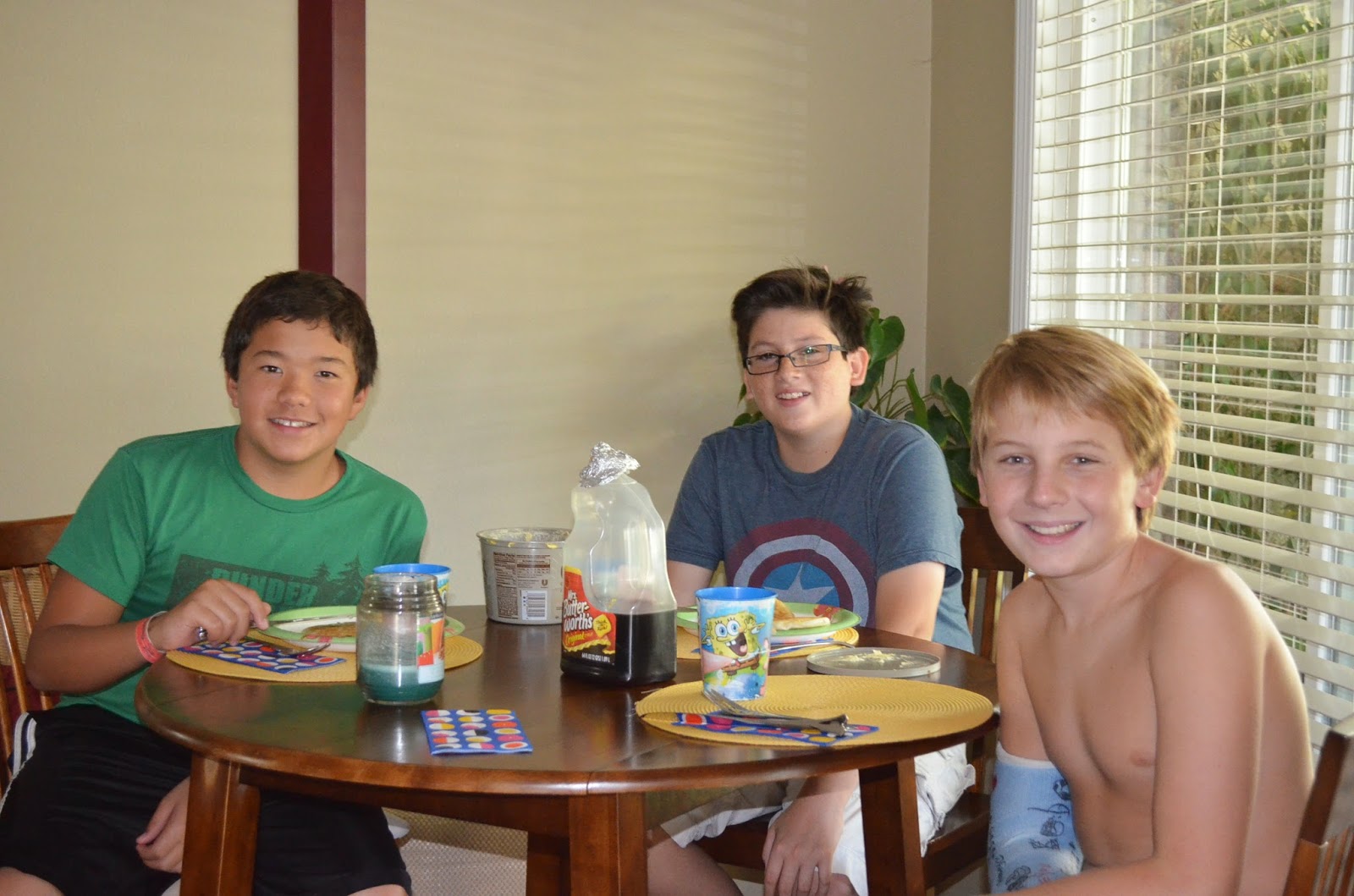 Daniel had two buddies spend the night and we made them nutritious chocolate chip pancakes for breakfast. Another hit! I loved to hang back and hear their chatter from the kitchen. Daniel was still floating from a birthday party high (he is totally into the boy-girl thing).
Please note:
Daniel isn't officially fourteen yet. That's tomorrow, the 31st, and it will be a mellow day. We are  pooped out around here because "Big Hits" don't create themselves :)
Happy Birthday Daniel!
Cheers to you, Clink!
We love you :)
Posted by UnicycleRose at 5:52 PM