We were just about to walk into our show at The Groundlings in L.A. when we started to receive calls from leaders from our Church's Youth Camp where Dan is staying. Of course, Teckie and I missed the calls. I knew something was wrong....It took a while, but we finally made contact with the two dads that were in the ER with Daniel. Yes, E.R., as in an Emergency Room somewhere in Arroyo Grande, over two hours away.

Long story short, we are headed up to Lake Lopez  -- after a solid four hours of sleep-- to pick him up. My son fell out a tree and landed on his wrist (THANKFULLY NOT HIS HEAD). And, when I say "landed" I don't mean the gentle flutter of a butterfly descending on a spring flower. This was more like a VIOLENT crash. See what I mean?
He broke both bones in his wrist. You might say that the
"arm bone's not connected to the hand bone."
Singing that makes is sound much better. Try it.
I talked to Daniel and could tell he was hurting. I requested they give him pain meds STAT. He was put on an IV morphine drip.

Half  way through the improv comedy show (which was hilarious, but a hurting Daniel was in the back of my head the entire time) the  hospital called.  I spoke with E.R. physician, Dr. Slaughter (Yes. Slaughter, as in slaughter a pig) to give consent  for a "procedure." They would sedate him and do their best to reset the bones. This is what it looked like after Dr. Slaughter "readjusted" his wrist.... 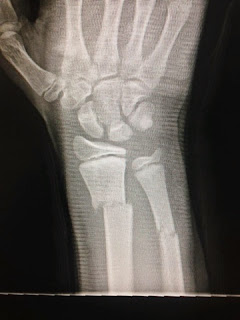 There is improvement, but the "OUCH factor" is still glaring in this mother's face. He will need some sort of surgery to fix it and is in a temporary cast right now. A huge cast! No more beach for his this summer. Oh, and it's his right hand, so school should be interesting.
Dr. Slaughter was amazing,... TEXTING me xrays and pictures throughout the ordeal. He must have been young and hip, plus  a slow night in  the emergency room. Great service that I appreciated MUCHO!

We returned home at midnight, grabbed a tad of sleep and are now on our way to pick Daniel up. He needs to get to an Orthopedic doctor.  All the technical names escape me now, as I was NOT there to ask a million questions. Details to follow.
I cant wait to wrap my arms around this little guy whose summer has just been cut short. So,  friends with sons.... please share this post and xrays to your monkey-like kids with a reminder to "Stay out of the trees!"
Posted by UnicycleRose at 5:17 AM