We made great time on our drive to Arizona stopping only for bathroom breaks and to refuel.  Crossing over the state line, gas was 55 cents less a gallon!  Whenever we visit here,  I realize how darn expensive it is to live in California.
While spending seven long hours in the car, Daniel and I concocted a million dollar idea ... Travel Pants! You could wear these pants when on a date, or in a group, or traveling in a car for hundreds of miles with your parents. This is how they work. Whenever you had gas, it would trap the smell and there would be no offensive odor. When you did make it to a restroom, you could unleash the stink and not offend anyone.  This idea left us laughing so hard, we cried. This will not be the last brilliant idea to be born road-tripping with a car full of males. 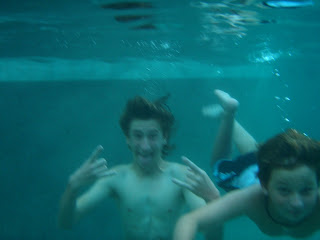 ﻿﻿Well, the first monsoon of the season was passing through Phoenix and we were excited to experience that. It was a letdown, only dropping a little rain and the temperature from 101degrees to 85, with 70% humidity. The air was thick enough to cut with a knife.

Upon arrival, we revisited Aunt Debbie's aquariums filled with  amazing fish and hermit crabs. The boys played with Bruno the hamster, and Debbie announced they could go scorpion hunting at night. They would use a black light because it causes them to glow. I had to ask, "What do you do with a scorpion once you catch it?" Answer: You capture and play with them, freeze them, or just let them go. Welcome to Arizona. 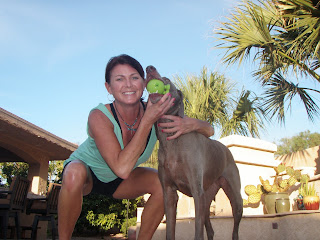 Swimming in 90 degree pool water with Cousin Joey the Weimarener was the perfect way to handle the crazy weather. We chowed down an awesome dinner of homemade cheesy manicotti (my sis-in-law is THE BEST COOK) and attempted to teach them how to play our favorite card game, Contract Rummy. Like I said ... attempted.
﻿
Day One of our trip was a success! Arriving here safely and spending quality time with Debbie and Matt, is how I hoped things would unfold. So far, no glitches. Although, I know at least one  snafu will sneak in during the next ten days. That's just life, isn't it?

As for Day Two? This morning my guys headed to the local Indian reservation in search of fireworks. They are legal here, and my sons couldn't be happier. Daniel "heard" that they are sold at most Indian Reservation gas stations "in the back." Um, welcome to Arizona :o)

Posted by UnicycleRose at 1:26 PM