June sure did zoom by, didn't it? Poof! It's gone and next up? Please welcome, Miss July!
To recap June? The Warped Tour was fun  because I hung with Overboard who convinced me to drive forty minutes to the San Manuel Indian Gaming Center after dropping off the boys at the Pomona fairgrounds. The casino killed about four hours of what was a long day of just the two of us. Overboard hit $450 on the slots fifteen minutes into our visit. She is freakishly lucky on the nickel slots. I can’t explain it;  the Indians love her.


After that,  we shopped then returned to our hotel to play Farkle and kill more time until 9PM to pick up the kids. All 10,000  Warped Tour attenders were leaving or being picked up at that very same time. Unbeknownst to me, THAT is when the concert ended. Leaving the fairgrounds was a mess, but I can live with that glitch ... It’s the Pomona gangs,  guns and knives that worried me. Thankfully, that was a non-issue, and I admit that I error on the side of worry-wart.
At the concert, Lucas was in heaven! One hundred bands playing all day ... it was mega music to his ears. He hardly had time to float back to Earth before leaving for a week of Fryathon. That’s our church youth camp at Lake Tulloch that includes a week of boating, skiing, tubing … well, all sports that include water mixed with over 100 teens!
While he was away, Daniel and I visited Magic Mountain, bowled; he floated through Hurricane Harbor and we hit the beach. We skated though a wonderful week together. Only having one child around sure is easy-shmeezy!
Lucas returned from Fryathon and zoomed up that day to Pine Mountain where we enjoyed a long weekend at a cabin with friends playing games, goofing off and  hanging out at the Country Club. Side note: We are NOT country club folks, but I think we pulled it off nicely.  We all loved the Ping-Pong, air hockey and pool tables in the recreation room. Who wouldn't?  ﻿﻿﻿﻿﻿ 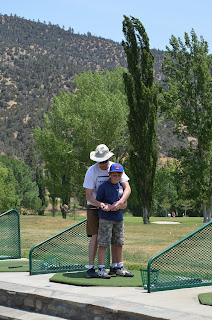 Daniel is keeping busy after swapping out one of the new chicks that ended up being a rooster. Our chicken drama is never ending. He brought home a baby chick and was in tears as the other chickens, all big, wanted to peck the little gal. Therefore, he created a small coop just for the newcomer, to keep her alive until she can fend off the brood.
When not loving on the chickens, Daniel has been airsofting with his pals and avoiding sleep at night. He will be thirteen next month, and THIS is the age pulling “all-nighters” is “cool.”  He seems to be tired often and I catch him napping mid-day like a toddler. The thought of staying up all night sounds miserable. There, I said it. I’m old.
Our Fourth of July Party was a hit. It’s hard for it not to be when the city fireworks show is practically in our back yard. It was fun to eat desserts, visit with family/ friends  and sing songs while we celebrated America’s 237th birthday. Man, she's old! The Fourth is my favorite holiday and half the fun is decking out the yard in red, white, blue and posting my favorite patriotic quotes on the patio. This year, I painted a custom patriotic aluminum cross! It’s my "official" Fourth of July swag for decades to come.

Speaking of crosses, the ones I am selling are officially hanging at a local store. No orders yet, but this is considered the "slow" season. It’s been a fun “side-thang” since I haven’t  been working. The best part has been the extra time spent with my  father, who despite being cantankerous, I deeply love. We had to come up with a name for the cross business.  We decided on “Little Crosses” because his last name (my maiden name) translates in Italian to (literally) “Little Cross.” That was an easy one!

So sad, too bad: My Teckie is officially furloughed and unhappily taking a 20% pay cut until the end of October. Despite that, we are moving forward with our vacation plans. We’re all  excited; some more than others, right honey?  It WILL all work out!
Life is too short, eat dessert first!
My goal is to blog my way through Phoenix, The Grand Canyon and Utah. Lord knows, there will be plenty of time driving through the desert.
Warning! Tomorrow Lucas takes his driving test. It’s surreal to me. I am not going to hyperventilate until he actually passes the test, and drives off without a parent yelling/sitting next to him. Until that moment, he still needs me!
Honestly, It's a ginormous blessing to watch your kids grow up!
It's a gift that is never taken for granted around here ;0) 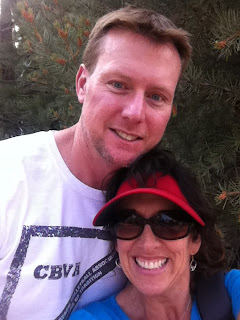 Peace, Love and Keep the Balance!
Posted by UnicycleRose at 1:36 PM