Hello 2013 and cheers to the real-life-balance challenges that await all of us! Clink!
I reflect on our family adventure to Palm Springs after Christmas. The highlight was the aerial tramway that, BTW, is the largest one in the world and only one-of-its kind in the western hemisphere. Oh, you want more tram trivia?  Perhaps you hope to try out for Jeopardy in the New Year. Well, Alex Trabeck needs you to know that this tramcar holds 80 people and has a slow cabin floor rotation turning twice per trip. In this carefully balanced goliath, we moved from Valley Station up 12,708 feet in a cabin weighing 35,600 pounds. Talk about getting high after Christmas! 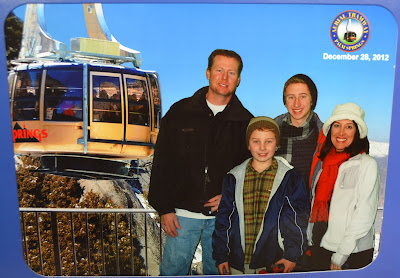 In my sick-little head, I feared the big earthquake would hit (I HATE seismic activity ) while traveling up to  Mountain Station, suspended and swinging our way up to the San Jacinto State Park .... Game over! It stressed me to be soaring with many strangers speaking a potpourri of tongues, being held up by metal cables, traversing up where you can clearly see the San Andreas Fault from the top. I prayed. We made it safely, and the exploration began. 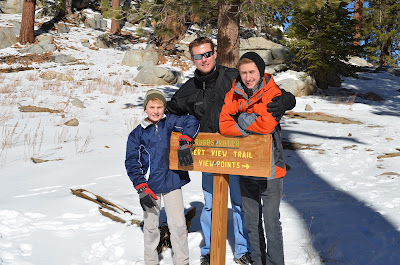 Our hike on the Desert View Trail was breathtaking. Literally! The air is so thin that high up that I soaked in God’s beautiful wonderland as I passed the inhaler around to Lucas and Daniel. And, it was freezing, having seven feet of snow and being 26 degrees! 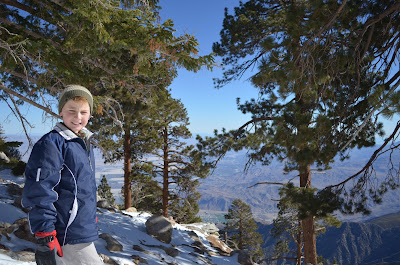 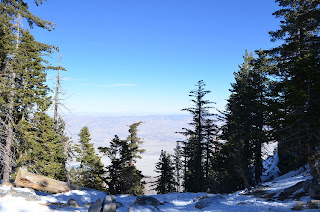 To think just thirty minutes ago were we're in the desert and not in the arctic/alpine zone at 10,834 feet! The views of the Coachella Valley were amazing!
It was an exciting, memorable day and it ended back in Palm Springs at dinner with my parents. Then Overboard and I went to visit the Indians. In my family “Visit the Indians” is code for “go to the casino.” While there, I played single-hand black jack and won enough moola to buy the iPad I'm tapping on. I know, I can't believe it either! Nor can my Teckie whom is a PC software engineer and sooooo "Un-Apple." He was not supportive at first then I caught him with Irene the iPad in another room. It's all good, so sorry Bills Gates.
﻿ Driving home from Palm Springs I knew darn well that it was, December 29th,  THE five-year anniversary of our house fire. However, this ride back home was not a “nail-biter” or full of anxiety like in 2007. I was sure that our casa would not be black with stinky ash or char and force us to move out for nine months to be rebuilt from the ceiling up. That was a crazy year!
﻿ On that note, while playing a holiday game, my son had to answer the question "Have you ever witnessed a Christmas miracle?" He thought about it and after some discussion Daniel concluded that the House Fire of 2007 was indeed a miracle, although at the time it felt like anything but a desired supernatural gift. However, God really can turn struggles into rainbows and unicorns, but we can't see that in the middle of the chaos!
As for celebrating New Years, it was gamey, not like hunting and shooting  quail, but we played many family-friendly reindeer games, ate yummy food, and kissed our loved ones at midnight.
﻿ I pray for 2013 to be a BLESSED YEAR with a foundation of good health and togetherness (My top favs). Years are like humans, they come in all different forms, personality, and characteristics, don’t they? Some you treasure and others can’t move along fast enough as you hang on to hope that the next will be better.  I commit to God no matter what circumstances attempt to push me out of balance.  In closing this long post (thanks for hanging in there), I depend on Him in keeping good balance on and off my unicycle. I expect and anticipate many changes but know I can’t meet those trials or triumphs without Jesus Christ. Praise Him for surrounding me with love, acceptance of change, forgiveness, health and the valued encouragement to and from people He places in my path. To Him all the glory be!

Again, Cheers to 2013! CLINK!
Oh ya! Please pray for Lucas as he makes a second attempt at passing the driver’s permit test this Friday.
Yes, this will be a year of new experiences for us!
Posted by UnicycleRose at 12:50 PM