Walking in darkness, God lends you people that emanate light and show you the way. For me, that was Farther Stephen Barber, 1997. He was the rotating chaplain for the UCLA Pediatric ICU and I was the freaked-out-mess-of-a-new-mom watching my infant suffer through two open-heart-surgeries that blossomed horrible side effects.
Father Stephen, a young Jesuit priest-in-training, was an angel at this time of turmoil. You see, we were meeting with the ethics committee at UCLA, contemplating taking our baby off life support and Father Stephen was right there comforting us. He stood inside of the extreme brokenness we were engulfed in.
﻿
﻿﻿Father Stephen walked with us into meetings with ethicists and doctors. We spent lunches on the UCLA campus chewing over the  meaning of life (no matter how short), a real Jesus, death and everlasting life. Lucas was only four-months old at that time, with an array of ugly, yet, colorfully rare complications that would make any rainbow shy away. It was a dark time. 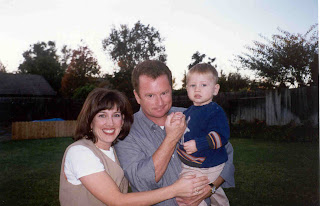 
Who knew Overboard had kept in touch with The Father Stephen? Overboard is a phenomenal lover of all things Catholic! She told me that he was in Southern California and she invited Father Stephen, yes, THE Father Stephen, to my nephew’s 2nd birthday party. Flabbergasted, excited, and melancholy thoughts filled me at the thought of seeing him again. So much life and time had passed since he last visited our home in 1998.


You know what popped into my brain as I gazed at these old and new photos? It is bizarre, but what I thought. It was a 1970’s groovy-wooden plaque that hung in our Silver Strand beach house when I was a child. It read, “Time heals all things except crow’s feet.”  Back then, I had no idea what it meant; five hand-painted blackbirds on pokey feet, some with wings spread out, standing under those words. How could time help their feet?
Now I get it!  Time really is a great healer (except for those darn eye wrinkles).

Back to THE Father Stephen story … God is so good! You can tell by husband’s reaction in this photo that when Lucas formally met Father Stephen (with zilch memory of his babyhood) it was a special moment for the parents, grandparents and entire family.  God’s abundant healing has grown Lucas up, as well as THE Father Stephen Barber. He is now the Head of Admissions for Loyal High school in Los Angeles.
This man that watched my crushed new-mom-self emotionally bare naked spent an afternoon with us and shared dinner with my entire family. He held the table captive with stories of working as the chaplain at San Quentin Sate Prison, among other things. Who knew God was shaping us to become these “other people?” I had no idea.  In the middle of that 1997 storm, I could not see that there was a bright, fully alive, and ordained future waiting to unfold.


Cheers to God’s goodness and to our friend,
THE Father Stephen! CLINK!
Posted by UnicycleRose at 9:54 AM