It's Spring and that means chick season!

Did you know there are thought to be at least 25 billion chickens worldwide, which is the highest population of any bird in the world? 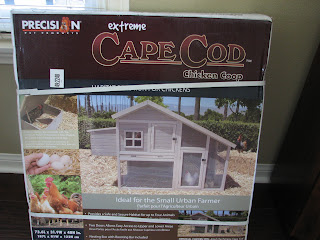 Did you know the typical commercial hen lays 300 eggs in one year?
Did you know that four of these fowl are soon moving to the Cape Cod chicken coop in my backyard? Yep, the housing market is lookin' up in Chicken World.
The heavy boxes arrived and now it’s time to build the cutest coop ever. What chick wouldn't want to live in a style of cottage developed on Cape Cod, Massachusetts, in the 18th century?  I'm sure feathered friends (dare I call them pets?) don’t care, but I think the coop is darling.
Once the Cape Cod is constructed, it’s off to the feed store to buy four chickens. It's during that transaction that we are official "Small Urban Farmers."

I asked Lucas if he had a name for his chicken. He answered, “I am calling her Dinner.”
Lucky Dinner! She will be one-cheery-chick-livin-large-layin-eggs in the Cape Cod of coops (now say that ten times fast).
Posted by UnicycleRose at 4:15 PM