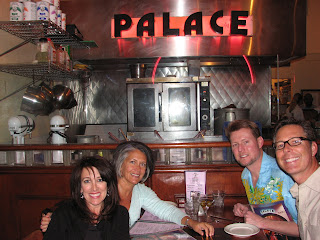 That is the word to describe my visit to Santa Barbara last weekend. Why? Because we went to The Palace Grill for dinner and on Friday nights, this Cajun American Bistro features award winning Mark Collier  performing spectacular magic tricks.  This guy is amazing!  The restaurant ceiling is covered in  playing cards that are a result of his tricks. I don’t know how he did it, by now Unicycle Rose is part of the authentic French Quarter ceiling décor of the Palace Grill. 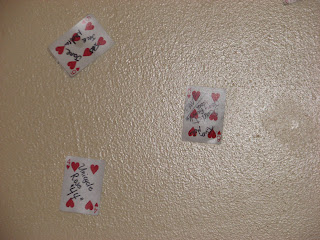 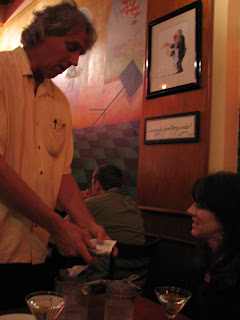 Not only was Mark captivating entertainment as he strolled working his magic, but he was a one-man act of wit and hilarity. For example, he closely held a small rope in front of me. Next thing I knew, it disappeared. I was amazed. He next made a card vanish and a few other things. I was stumped until he did it with a pack of cards that “thumped” as they hit the floor behind me. I turned around to see a pile of his “magic.” My Techie, Miss Piggy and Lui were in stitches because they saw how he was really playing a trick on me, by throwing the objects outside my line of vision. I almost peed my pants laughing so hard.  Maybe it was the jalapeno martinis that created this magical gullibility? Regardless, you gotta be able to laugh at yourself! 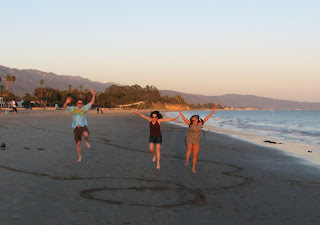 The  Palace  Grill includes more offbeat fun;  they hand out a little menu and  instruct you not to open until the music starts. Soon, a song begins and the entire restaurant is singing “What a Wonderful World,” by Louis Armstrong.  Who can resist a sing-a-long especially after a jalapeno martini? Not me! 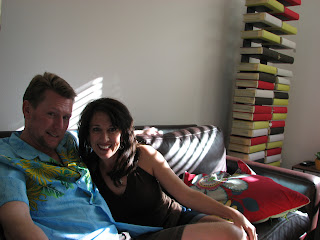 The next morning, I rode Blanche while Lui ran. We talked the entire four miles, as we cruised the Santa Barbara beach that was bustling with life. The weather was gorgeous! Later, the four of us enjoyed a tasty Mexican lunch before we headed back to the real world. ﻿﻿

Getting away with my husband sans the kids is magic in itself. I wish I could make myself disappear to weekends like this more often.
Posted by UnicycleRose at 1:33 PM