A Kid at Heart 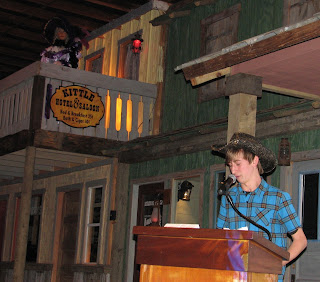 ﻿
Last Saturday is tattooed in my memory.  Lucas was asked to be a guest speaker at a fundraiser titled “A Kid at Heart.” This Camp del Corazon benefit held at The Santa Barbara Carriage Museum was hosted by UCSB alumni and soccer player, Waid Ibrahim. Camp Del Corazon is a five-day camp on Catalina Island for children with heart disease and nothing makes Lucas happier than sharing the positive happenings that have rained down on him because of this amazing place.  Two bands played from the Santa Barbara Youth Music Academy and they were awesome! Dr. Kevin Shannon, the founder of this camp, spoke while guests indulged in Firestone wines and appetizers catered by Fresco Café.  Big Yum!
﻿
﻿When we attend these events, I sit in utter amazement at how God’s plan unfolded. Here is my kid (forever called Baby Lucas in my heart) who was close to being taken off life support when he was five months old, and there he stands, cute and bright as ever, speaking to a crowd about his heart disease.  Praising God every minute he is at the podium, I marvel at how far we have come on this crazy ride of congenital heart defects that began almost fifteen years ago. Who knew Lucas would land here? Back when he was a baby, I did not think he would survive, let alone thrive. The Executive Director of camp, Lisa Knight,  invited us to be guests at the Gala del Sol this spring at Universal Studios, where Lucas will share his story again.  This time he will don a snazzy tuxedo instead of cowboy hat.﻿﻿﻿﻿﻿
﻿

As the night ended, a mom and dad pushed a stroller towards us and introduced themselves. They told Lucas his story gave them hope, as their son Rudy is struggling with similar medical issues. It was a blessing for us parents to share the frustration and hopes that are part of having a child with heart issues. It’s amazing how we speak the same language.  Most parents don’t converse “tracheotomy-feeding-tube-pulmonologist-UCLA-open-heart-surgery" lingo like us.. 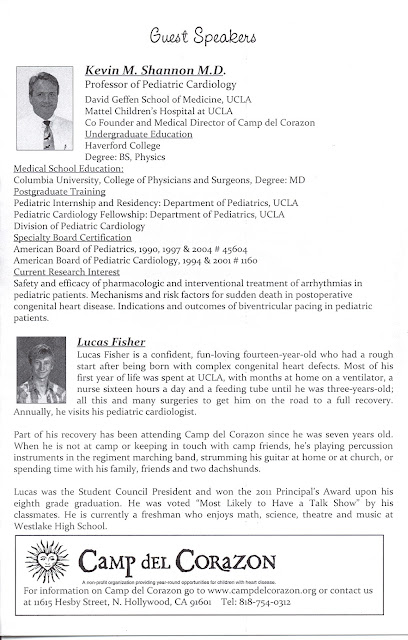 What can I say other than I'm very proud of my son and extremely thankful that God has kept him out of the operating room these past thirteen years. Good health is everything people! Amen.﻿﻿﻿
Hee Haw ;0)
Posted by UnicycleRose at 12:38 PM