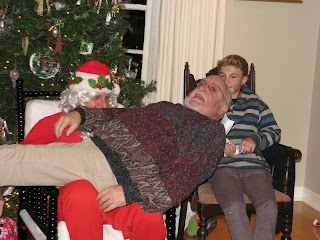 Have you witnessed Santabuse? By my defintion this is physical or psychological mistreatment of Santa Claus during the Christmas season. Let me give you the backstory on what led up to the "roughing up" of Old St. Nick.

My Italian Clan gathers for an annual Christmas party and it’s a wonderful piece of our Christmas tradition. The Crosetti Christmas Parties have always included the same basic ingredients:
Italian dinner:  This year it was Paella, an Italian seafood and rice dish. In the past, it’s been Lasagna, Polenta or any meal that is high carb and teams up with wine. BTW, when you are Italian there is no food group that does not team up with wine.


Reindeer Games:  This year we played Pictionary (Boys Vs. Girls, guess who won?) and Christmas Bingo at Cousin Maria’s house. Then we busted out bells to jingle while belting out the same old Christmas carols. Other years we reenacted the Nativity scene. Note that many children are needed to pull the Nativity off and a minimum of one baby Jesus. This was not that year.
A Gift Exchange: This has changed with time and this year we kept it simple.Bringing a gift insured you a trip to Santa’s Lap.

Santa Claus: The party peaks when Santa shows up, especially when little ones are involved. 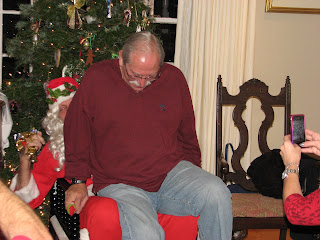 The Red Suit is usually donned by a family member or male friend and this has been going on for decades. As a child, I believed that it was the real Santa Claus. This awesome night led up to that big moment when you would hear bells jangling and Santa would appear hollering,”Ho! Ho! Ho!”  This year, Cousin Mike played Santa. Back in the 60’s and 70’s, when I was a small elf, The Dads would take turns wearing the suit. There was a time when Cousin Mike sat on Santa’s lap, proclaimed he was a good kid all year, and then received a gift. Back then even he believed "Crosetti Christmas Party Santa" was the real deal, and (fast-forward forty years) it’s his turn to stuff a pillow in his chest and create magic for the little ones. 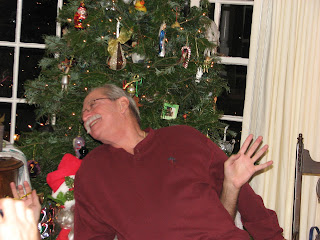 ... And THIS is where Santabuse peeps in: My Dad and Uncle love the sequence of events that are repeated again and again, year after year that led Cousin Mike from once sitting on their Santa knee to these old dudes plopping down like a ton of bricks on his knee.  Ahhh, the Circle of Life!  What a blessed moment to witness family Santabuse. My Dad displayed "reverse planking" on Santa with the grace of Nadia Comaneci. And, if that wasn't enough for Cousin Mike's knee? Uncle Richard heartedly parked his can and deep laughter on Santa with the density and weight of Aunt Jo's fruitcake! Yes, that heavy!

It was wonderfully hilarious and won’t easily be forgotten, no matter how hard I try.
Posted by UnicycleRose at 8:17 AM