Chester and The Metal Detector

﻿
Awaking last week, I had a “whim,” (that is what my husband called it), to get a Christmas puppy. You see, one of our two dachshunds Goldie, licks everybody. She is stuck in a constant, neurotic state of licking us like a tootsie pop. My solution?  If she had a puppy to care for and obsessively lick, this would be the perfect gift for everybody! A pet for our pet!  Besides, who can resist a puppy with their saucer eyes, floppy ears and drunk-gallop?
Drinking coffee while perusing the paper in bed with my kids and dogs, we found a litter of two male mini-dachshunds, 9-weeks-old.  I announced that we would go check out the pups that day. I was feeling excited and determined, and maybe manic about having a sweet puppy around. I did some puppy research to educate myself while my husband remained calm about my “whim.”  He asked how we would pay for it. Um, hmmmm  (Sidenote:  I would never buy a dog without his final blessing. That’s called an irreconcilable difference).
Later that morning we met the pups. Of course, we wanted one, but explained to the owner that we had to convince the main breadwinner. Driving home, we named our puppy Chester because everything on the puppy was Chestnut colored; fur, eyes, nails, nose, and tail. Darling chestnut Chester, our little fur ball.
When we returned, I took a long unicycle ride to chew on these thoughts like a bad puppy gnawing on a new shoe. The voice of reason slipped in with each push of the pedal. I felt torn. It was at this point the caffeine started to wear off as I did the math on the cost of shots, crate, puppy chow and loss of sleep. 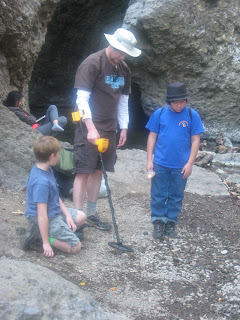 We did not buy Chester. God’s provision shined through as I thanked Him for my anchor, my husband. He knows my impulsive self better than anyone and was gentle and wise to let my whim play out. Where I’m  whimsical and off-kilter, he is steady and balanced!  We talked it though and agreed we were open to another dog, but not Chester. There were signs of poor breeding (well-bred dachshunds have black noses).

This Christmas whim made for a fun vacation day and reminded me of why I married my teckie-doting husband. Do you know what he got for Christmas? A metal detector.  His was not a whimsical purchase, but researched and well-thought out. That’s an engineer for ya! He brought it hiking/rock climbing this week and so far he has uncovered a  whopping total of fifty cents! So, not only is he my stable voice of reason, but we love and enjoy the unusual entertainment he brings to family life.  I mean really, aren’t metal detectors for retired men with black socks to walk on the beach with? More on that later…
For now, Happy New Year's Eve everybody. Be safe out there tonight!
Posted by UnicycleRose at 11:24 AM

I just had to laugh out loud reading this......I just today told my husband I wanted a third dog. Our two toy poodles are very needy (translate expensive) little boys and the last thing we need is another dog! I completely understand about the irreconcilable difference thing when it comes to buying one.

We once had a big yellow lab and my husband would really like another lab....but oh, dear they chew everything and when they get old and down in the hips, it is not easy getting them in the car for a trip to the vet!

I think my husband would like a metal detector and maybe he could find something really cool!! Or maybe fifty cents! :)