Back to Bikini Bottom 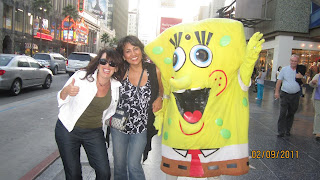 You may have heard that a man dressed as SpongeBob SquarePants was detained by police outside Grauman's Chinese Theatre in Hollywood last week. The man was questioned but not arrested in what a Los Angeles Police Department official described as a "brief incident with two females."

The incident was the latest run-in between characters that pose for pictures with tourists and then aggressively demand money, according to police. City rules allow people to tip characters, but prohibit them from demanding payment.

I laugh at the timing of this because I was just in Hollywood and had a photo taken with this SquarePants guy. His costume was filthy and I hesitated to get close to Dirty SpongeBob.  He did not ask for money but did rub his fingers together after the picture was taken. He was totally expecting moola. My friend gave him a dollar and we went on our way to the Hollywood Bowl. 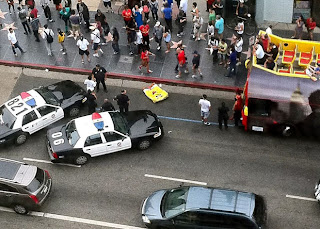 Back to Bikini Bottom for Dirty SpongeBob!
Posted by UnicycleRose at 12:26 PM