Big Blister, Carla, Miss Piggy, Tofsy, Kurt and Karl are just some of the nicknames for my older sister, Cara, who celebrated her 45th birthday yesterday. Forty-five sounds so old and it seems last week we were four-and-five together building sand castles, riding bikes, playing office and wearing matching outfits. 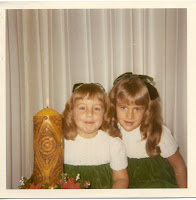 Those that know Cara would describe her as hilarious, responsible, hard working, creative, artistic, driven, playful, beautiful, athletic and unique. She is a good friend to many, an excellent dog–mom to Cinco, wonderful wife to Scott and a patient, loving Aunt to my boys. No matter what we call her, she’s known in my heart as The Best Big Sister and Dear Friend. 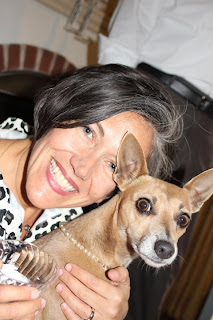 Let me share how my “Big Blister” acquired her nicknames:


Carla is her trailer-park name. One bored day we renamed our family with white-trash names. My younger sister is Candy, I’m Crystal and she is Carla; all spinoffs of our true names.
Miss Piggy is another name for her because she collected pigs growing up. Yes, swine.  As in, plump pink farm animals in all fabrics, figurines and collectible forms that decorated her room growing up. 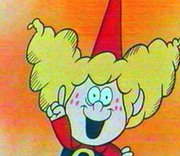 Tofsy was a cartoon back in the late 1970’s that never made it big like the Electric Company or Smurfs. However, we loved watching it. Tofsy was a kooky character with golden-puffy hair that poked out on the side of his head like two bushy funnels.  When my sister lets her curly-wavy hair, go natural, she looks like Tofsy. No kidding. This zany hairstyle happens to her to this day … la, la, la, la, la, la, la, la, la, la, la, la, la, la!
Cara named herself Karl over a decade ago after a bad haircut that looked too short and masculine. I’ll admit she did look like a man-woman and her wonderful sense of humor kicked in.
On that same note, years later, she decided to lighten the hair under her nose. You know how women grow a little stache and have to wax, pluck or lighten it? It was the first time she tried peroxiding them and days later, she tanned a dark golden brown. Under her nose, glowed what looked like golden-first whiskers on a fifteen-year-old-surfer-dude named Kurt. So we called her Kurt, had a great laugh and then she started waxing!

Can you tell how funny my sister is? In addition, these are just some of her monikers with silly side stories! I can’t imagine my life without Cara because her many nicknames, humor and our good memories have kept a smile on my face year after year!

Happy Birthday Cara! I love you!
Posted by UnicycleRose at 11:36 AM

Don't you think family life is a hoot!? lol And I can clearly see that you love your "big blister"!

What a fun post. I hope Cara/Karl had a wonderful birthday. She sounds like a fabulous sister to have.