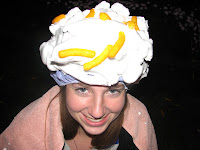 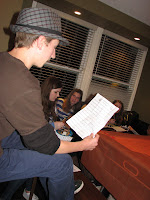 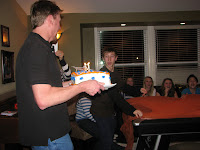 Do you ever have a month where it ALL happens? March is and has always been that crazy month for me. 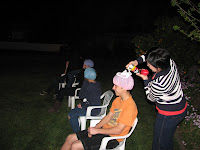 We have four family birthdays and that alone throws me in a tizzy. Here are some pictures from Lucas's 14th class birthday party. What a memory! My sister, Cutie Pie, chaperoned with us. She made sure I did not hover over the kids or embarrass my son. Watching the flirting and coolness from afar cracked me up! All twenty kids played Cheetoh Head. This game entails teams throwing cheetos from seven feet into a showercap full of shaving cream. The biggest Cheetoh-Head team wins! They loved the air hockey tournament, played "Who knows Lucas best?" and fumbled around during the three-legged race. My goal was to feed them dinner and homemade ice cream cake and keep them busy. They were so busy that we did not get to do all that was planned! It went by fast and  the kids did not want to go when their parents showed up. That's great because I am a firm believer that it is always good to leave wanting more. 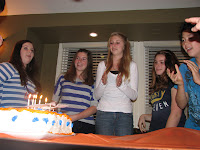 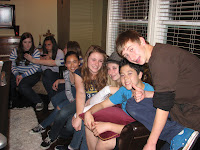 Today I am packing my son  for his eighth grade Washington D.C. trip. Along his visit to New York and Washington D.C., he will be sharing a hotel room with three other fourteen-year old boys. And yes, this concerns me. I fear he will not sleep-a-wink or shower. Brushing of teeth? Clean underwear? Taking his vitamens? All a long shot. I have to let it go and trust God that he will not lose his wallet (my biggest worry), and that they'll have a safe, memorable trip.
I know, I know, everyone could go on and on with how busy family life is. But for many reasons, March is the busiest month for us! What's yours?
Posted by UnicycleRose at 10:06 AM 2 comments: Links to this post

The Tomb and God's perfect timing

God's perfect timing prevailed as Lucas was handed the topic of his essay in the midst of real life experience. Let me share it with you.

Arlington Essay ~ By Lucas ~ 2-28-2011
A few months ago my Mom sent me an email about Arlington National Cemetery. Unfamiliar with this historic place, I wanted to dive into learning more about it. This essay has provided me a chance to do just that. Learning that the Tomb of the Unknown Soldier is guarded twenty- four/ seven, that the guards must be a certain height and waist size, and that this monument represents every soldier that has died in battle that couldn’t be identified or returned home, left me thinking about my veteran grandfather whom I called Grandpa Fish. 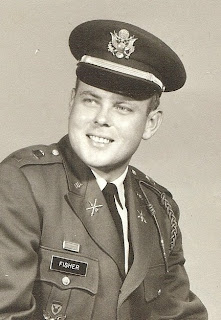 Grandpa Fish fought in the Vietnam War for eight months. He was part of the historic Battle of la Drang. A movie titled “We Were Soldiers” was created in 2002 which revealed this historic battle he fought in. Grandpa Fish rarely talked about his experiences in Vietnam. He did share that he had crashed three times in a helicopter, once in training and twice in battle. He said that while being in a Huey, they came upon heavy fire and he looked at the status lights at the front of the helicopter and they were all red. The helicopter went down; he jumped out, grabbed his M16, and landed on a cactus, only to be fired upon! Sadly he lost his best friend in this battle. Although I won’t go into details, I can say that it was a horrific memory for him.
Although my Grandpa Fish was not an unknown soldier, he sacrificed much for our country. About a year ago he was diagnosed with a brain tumor that was caused by exposure to Agent Orange during his time in war. He passed away six months later on July 3, 2010. I attended his soldier’s funeral in Fort Knox, Kentucky. He was honored with a 13 gun salute and a flag folding ceremony. My little brother and I were given a shell from the guns fired at the funeral and I treasure this token that reminds me of Grandpa Fish and his love for our country. 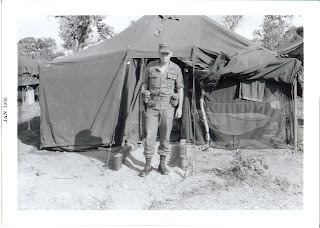 What would it mean to me to lay a wreath at the Tomb of the Unknown Soldier? It would be a way to honor my Grandpa and those soldiers that were never identified. To lose a loved one is tough and to not receive the soldier’s body back from war would be unbearable. My heart breaks for those families, as I know the pain of losing my Grandpa. I can only imagine the painful loss that is represented at the Tomb of the Unknown Soldier. It would be a privilege to pay tribute to all those who fought for our freedom by being chosen to lay the wreath.THE END
I am so very proud of you, my fourteen-year-old young man. Happy Birthday and God Bless  you in this new year of amazing, wonderful YOU!﻿
Posted by UnicycleRose at 4:42 PM 1 comment: Links to this post

Maybe this is how skiers feel when a layer of fresh powder has covered the slopes? They yearn to ski and enjoy what Mother Nature has provided. When I woke up Saturday morning it was HOT out; a gorgeous Southern California Saturday morning … Clear blue skies, birds singing and I noticed that our peach tree is budding. Spring is on her way and the unicycle rider in me felt drawn outside to soak up all the natural beauty. When I ride my unicycle it feels like I am living out loud.

Living out loud means participating in those parts of life that leave one feeling most alive. In my case, Unicycle riding. People are so receptive when I am cruising Blanche, and if I had a dollar for every time I heard “you’re missing a wheel,” I’d be rich!

I put four miles on Blanche and applied my new challenge to live out loud and ride that four miles each week. I signed up for another half-marathon and although it’s six months away, if I don’t ride Blanche regularly, it becomes harder to stay in balance and in control when I do hop on. Isn’t that true about many things in life? If we don’t practice to maintain our skills, talents, relationships, etc., they eventually tilt out of balance. I want to avoid that.

My challenge to you is to pick out one thing that feeds your soul. Whatever it is, it leaves you with residuals of optimism, thankfulness and an overall feeling of well being. Then just do it. Live out loud.
Posted by UnicycleRose at 11:02 AM 1 comment: Links to this post