Despite the grief of Little Larry’s death, some sun passed the rain clouds to brighten our home.

My son was in the running for the office of President at his school. Last year, he ran for President and lost. His resilience and perseverance impressed me as he went about campaigning, speech writing, and trying to sway the vote in his direction, again. All five candidates running for president (three eighth graders and two seventh graders) were qualified, hard-working, talented leaders. I did not expect Lucas to win, although I prayed to one day see him in this role. My son has wonderful leadership capabilities, people skills and smarts. But, doesn’t every parent think that about their kid?

The election results arrived last Friday after school. Lucas approached the car as I rolled through the pick-up line. He opened the car door and said he had lost, tossing his fifty-pound backpack in. His little brother climbed in the back seat and said, “He lost, Mom.” Straight faces abound. 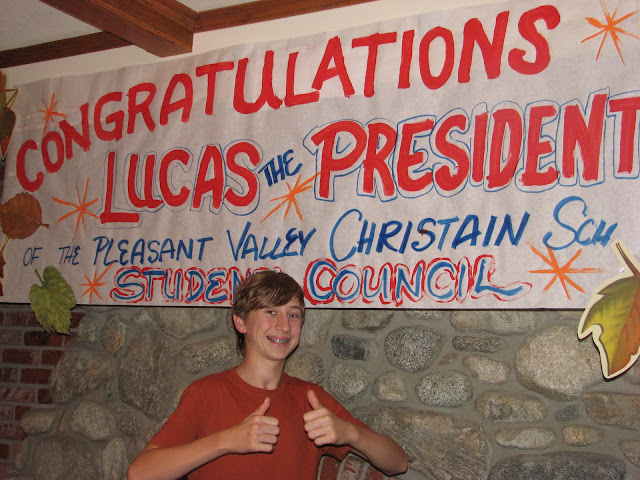 With Lucas next to me, I started to tell him how proud I was of him. Then he said, “MOM, I WON!”

And having cried my eyes out for three days, let’s just say that my emotions were raw and they held no reserve for practical jokes. I told him to tell me the truth because “Mom is very sensitive and can’t handle any more stuff.” He confessed that he won. And brother Daniel, giggling with happiness in the backseat, backed this truth. Those little stinkers!

I started to cry. I usually wouldn’t, but like I said, my emotions were as thin as Callista Flockheart and I couldn't help but let tears fall. Happy ones, and it felt wonderful! I was in an elated state of shock — a pleasant place to visit. 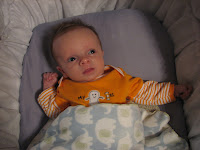 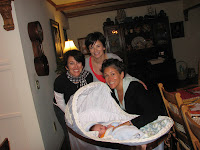 So, this Sunday my Big Fat Italian Family gathered for a Presidential (Meat) Ball to celebrate his victory. Of course, Overboard made him a huge sign because that is what she does. And she cooked his favorite Italian dish. We chowed hard, gooed over Baby Benson, toasted to Lucas then played a game of Balderdash (a Presidential request). The only thing missing was my husband, who was out of town for work, and a piece of my heart that is still stunned over Little Larry’s death. I hold Lucas’ success close as I prepare for Friday’s funeral mass and reception in our home. There is a lot to put in order among the rain of sad emotions, but I lift my face toward that ray of sunshine that puts a silver lining on the grey clouds.


Congrats President Lucas,
we are very proud of you!
Posted by UnicycleRose at 9:30 PM

Congrats to your son. That's awesome! I wish him the best luck at president.

How wonderful for your son. I know you must be so proud of him.

Wow! How exciting! Congrats to your son...the President!