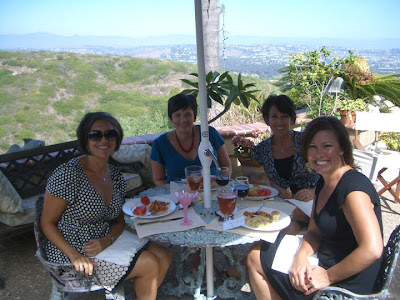 A couple weeks ago Aunt Linda and I drove to Laguna Nigel to attend a family baby shower. It was a lovely Sunday afternoon (see photo) and the shower was delightful (it’s a girl!). On our two-hour ride home, we decided to take a different route back to Ventura County. This involved a toll road, something I am totally unfamiliar with, but was willing to try it if it would shave time off our drive. Aunt Linda pulled out $20 to pay, but not seeing a booth we stuck it in the console, anticipating stopping to pay somewhere along the toll road ride. Cruising on the toll road proved to be just like a regular road, no bells or whistles, just a lot of chat, chat, chat. Not once did we pass through a toll booth to pay what we assumed would be about five bucks. Not once. The toll road merged into the main freeway and off we went. Hmmm, I thought … maybe since it was a Sunday the toll was not enforced? Lucky us. Whatever. We just wanted to get home.

Imagine my surprise when The Toll Roads Violation Enforcement Department sent me a not-so-love-note. It informed me that the vehicle identified (mine) was traveling on The Toll Roads without making the proper toll payment, or having a valid FasTrak Transponder . Stop there. What the heck is a FasTrak Transponder? Like the Fast Pass at Disneyland? Some special apparatus I pick up at Target? Or gas station? Apparently I was “caught” driving on the Toll roads without making the proper toll payment and this violates California Vehicle Code blah, blah blah….and these violations are subject to a civil penalty under blah, blah, blah. In other words I am being cited for the amount of toll, $4.50 plus an outrageous penalty of $55.00! That short stint on the Toll Road was nowhere near worth sixty clams! I’ll admit it, at first I felt ashamed… Bad girl! Then I called my aunt and as we talked and recapped that mediocre non-directive toll ride, I got angry.

Long story short: I filed Section B – Request for an Administrative Investigation. That sounded judicial and red-tape like, but I must attempt to overturn my penalty. Sixty bucks is a lot of money to me (always has been) and I can’t just fork it over without explaining myself (“Splain Lucy!”, as Ricky Ricardo would say). They will investigate my circumstances and my Civil Judgment will be sent in a week. Note to self: Pick up a copy of Toll Roads for Dummies.
Posted by UnicycleRose at 8:16 AM

You go girl! And congrats to Aurora aka Aorta! You have been busy with all these parties and showers and fun! Can't wait to hear the outcome of the toll road fiasco!