Do these things bug you too? What’s on your list? 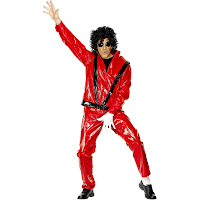 1. The Halloween costume catalog arrived in yesterday’s mail. I don’t know… does it bother me more that it was delivered in August, or that my son wants to be Michael Jackson? Tie.

2. Only 19 days left until school resumes and I return to work with twenty-four second graders: little people who are missing teeth and pick their noses. Sounds like I work at a convalescent home.

3. My neighbor’s goliath RV that blocks our view of the end of the street, city and rest of the outside world. Where is Ty Pennington when you need him? “Move that bus!”

4. We started with three mice, our dachshund ate one. Then one mouse ate the other. Ewwww! It bugs me that we have a lone surviving mouse, Jerry, living in our garage. He is eyeballed by the dog all damn day. Will Jerry ever die? Or should we donate him to a friend’s pet snake? Eeeew again, but what else? Poor things gotta be petrified and bored. Ok, it’s a mouse.

5. Girlfriends that would never, ever leave the house without makeup. What are they hiding under there? It can’t be THAT bad, can it? Two words: Reeee Lax. And that’s coming from me! 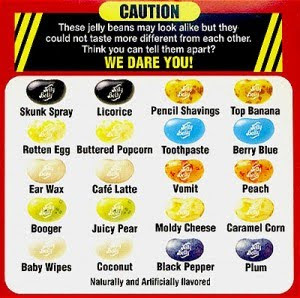 6. Jelly Belly’s are a favorite candy. Love them. It really bugs me that they ruined the gourmet bean with barf, moldy cheese, pencil shaving, dog food and ear wax flavors. If you happen to get a booger flavored bean instead of juicy pear – you’ve’ been Bean-boozled. It’s gross! . Maybe that’s the point. Just in time for Halloween, see number 1.
7. A “friend” (term used loosely) tagged me in a Facebook photo. I saw that ten people had commented on it. I perked up! Some folks’ names I recognized and others I had never heard of. I was curious, what picture was posted? It was no pic of me, but a city issue meeting she is promoting. I am up to 20 comments clogging my email. The old bait-and-switch …. Manipulative, sneaky and bothersome. I’m ready to unfriend her because I don’t need to be used in this silly way to promote her views.

8. Skin chaffing. I love the nine-mile unicycle rides sans the skin “fallout.” Time to invest in some special products for those sensitive areas. Half Marathon here I come!

9. Seeing people in clothes swimming in a pool or at the beach. This includes babies wearing only non-swim diapers….fully loaded water absorbed ten-pounder diapers that practically drag in the sand. I don’t get it. I’m happy they are enjoying the water, but it looks uncomfortable to this California girl. Buy a swim diaper or invest in a cheap swimsuit. That is why Target and Wal-Mart were invented, right?

Posted by UnicycleRose at 10:53 AM

I get your peeves; my are maybe less overt. I cannot stand being at the grocery store, for instance in the produce department and having someone try to get in one inch space between my body and the veggie bin I am peering into.
Another one is people who use bad grammer. I could go on, but I don't take up too much of your space...I'll just have to do my own blog this topic!

i think i'd be more bothered if my kid wanted to by MJ! ha!!

craig is a cyclist, and just started buying some kind of "butter" that he applies "down there" to prevent chaffing on the bike.

Bring on the butter!

Yum vomit flavored jelly beans. do they think they're slick or what? LOL Love your list!!!! My personal favorite is your #2!

If you saw my washed out face, you would understand. I just can't feel presentable without my makeup. To answer your question, a verrrrry pale face and it is THAT bad and I can't reeeeelax if I don't have a little color.---> 5. What are they hiding under there?

All I can say is GROSSSSSSS ----> 9. "fully loaded water absorbed ten-pounder diapers"

100 SPF sunblock just doesn't do the job for me, so I have no choice. Hat on to protect my scalp and shirt for my shoulders. I will trade my skin for yours any day! 9. ----> Seeing people in clothes swimming in a pool or at the beach.

I CAN'T stand when it is COLD outside and you see parents dressed warmer than their babies. I want to yell at them.

I went to Hobby Lobby and they ALREADY have christmas decorations out and for sale.

your convalescent home comment made me choke on my coffee :)