Some things are not meant to be 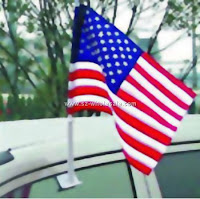 Overboard, my Mom, took our kids to the movies yesterday and this gave my husband and me time alone, our first in weeks. Driving home from our errands, I picked up the flag sitting on the console in between us. You know those flags that attach to your window and flap as you drive? It can be an annoying sound, but I love Old Glory and this is the season to flaunt her. So I have been doing just that.

“Guess how many times I unrolled the window with this clipped on?” I asked him, holding up the car flag. He paused.

“At least once … for you to ask” he answered.

Still upset by my stupidity, I went on, “And you think I would have learned from that first time, but nooooo. I did it a second time and thankfully, again, we were driving in a neighborhood, so I was able to turn the car around and pick my car flag off the street. Stupid me. Twice. Can you believe it?”

He chuckled as I continued, “The kids and I had a good laugh as the flag “ka-flunked” into the wind. And I was so thankful I was not driving on the freeway when I forgot and unrolled the window, otherwise my car flag would be long gone. For good. Then I would really be bummed. I just love this thing.”

Approaching the freeway with my husband driving, I thought that if I attach it to the passenger side window, instead of the driver’s side, it will have a better chance of survival. So I roll down the window, clip on Old Glory and roll up the window real fast. I hear the flapping through the window, but am very pleased with my solution.

Not a minute after that we are on the freeway and my husband looks to my window, and without thinking, he rolls it down, sending my favorite and one and only American car flag flying out the window, down the 101 freeway. Long gone. For good.

“Nooooo! No! What?” I yelled at him. He realized what he had accidently done. But it was too late. My American car flag lay a mile back somewhere on the freeway. Long gone. For good. I called him names and we laughed all the way home.

Some things are just not meant to be. But next time, our A/C will be on and we’ll put a Post-it note on the window button.
Posted by UnicycleRose at 1:59 PM

Cute story. I love our flag too.

Oh no! At least you laughed about it. That would be such a bummer, though.

Ha ha! As a husband, I feel for the guy.

Hi Rose,
I gave you a Blog With Substance Award. Please view it on my blog. I didn't have your email to notify you. You can put it on your blog...enjoy!