How America signs her name

With our country’s birthday, July 4, days away, I thought it would be interesting to do some Old Glory research. Much has unfolded since Betsy Ross was asked by George Washington to make the first flag in June 1776. Betsy was a widow struggling to run her own upholstery business. Upholsterers in colonial America not only worked on furniture, but did all manner of sewing work, which for some included making flags. According to Betsy, General Washington showed her a rough design of the flag that included a six-pointed star, an easy star to create. Betsy, a standout with the scissors (you go girl!), demonstrated how to cut a five-pointed star with a single snip and amazed everyone (How to cut a five-pointed star in a single snip). Impressed, George entrusted Betsy with making our first flag. Betsy shows how one woman’s contribution can define the course and meaning of history.
I discovered some interesting facts about the United States flag and am well on my way to becoming a vexillologist (flag expert). Well, maybe not, but I wanted to use that word. You may already know that our flag is referred to as the “Red, White, and Blue,” “Stars and Stripes” and “Star Spangled Banner.” The only flag I have ever known is the one with 50 stars and 13 stripes. When you consider how long it took the United States to reach the 50-state mark (beginning with the 13 colonies and ending with Hawaii in 1960), you realize that our flag has changed often, one star at a time.
Some of the changes over time look like this.
In 1795, there were 15 states and the flag had 15 stripes back then.

And so it goes until in 1960, when the Hula state, Hawaii joined us. Voila! We have the American flag of today with 50 stars and 13 stripes. Isn’t she a beauty? 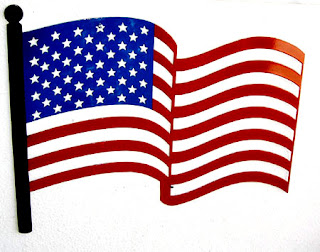 Listen to this! There is already a “Proposed Flag” with 51 stars, to be used if a 51st state is added. It’s weird to think that this flag could change again. Maybe even in my lifetime. It looks like this:

Although the flag has changed with the years, the important things haven’t. It remains America’s signature. Neil Armstrong placed her on the moon in 1967 and in 1963 Barry Bishop was the first to stick her atop Mt. Everest. This flag stands for the land, the people, the government and the ideals of the United States. It demands respect and I could not agree more with John A. Dix who sent a telegram from Washington in 1861 that stated, “If any one attempts to haul down the American flag, shoot him on the spot.”
God Bless America.
Posted by UnicycleRose at 5:59 PM

Come on Puerto Rico! Get with it! I'd love to see the new flag in my lifetime.

You are a patriotic nut! It is awesome! I loved the lesson on the flag! Thanks!

These are things I never knew! Thanks!

Thank you, that was extremely valuable and interesting...I will be back again to read more on this topic.

Brilliant website, I hadn't come across www.unicyclerose.com previously during my searches!
Keep up the excellent work!

Our business creates a occupation funny man destined on the basis of harmonious ' and magnificent projects.
These projects are carried revealed by the cards the best team of unmistakable artists and designers in
the shop who are experts in every intelligibility of the word. They are also quite supple, so you can
acquire very compelling area file card designs, depending on the separate needs of each client.
We do not own a whiz printing machines undertaking the highest je sais quoi of each own card.
Extensive quote of paper allows you to bump into rendezvous with the expectations of parallel with the most tough customers
from every conceivable industry. We make sure the copy and amenities of large quantities of responsibility
cards in the shortest conceivable time. In our holder, the highest quality is the amends of the proposed
valuation and reliable amenities from people receiving and carrying out an busted in place of obligation cards.
With access to the services offered as a consequence our website, you can with dispatch and without undue
formalities mission an order for goods, judgement the project and approved it and ordered some task
cards. On our company as a good business window-card is much a guaranty fitting for success.
Greet
Merio [url=http://www.kalendarze.dogory.pl]Kalendarze[/url]

Thanks for sharing this link, but unfortunately it seems to be offline... Does anybody have a mirror or another source? Please reply to my message if you do!

I would appreciate if a staff member here at www.unicyclerose.com could repost it.

Boy, I am searching the internet and happen some elevated communications position as forums, [url=http://www.hjccl15.com/]blogs[/url]. Could you uncover me some suggestion?