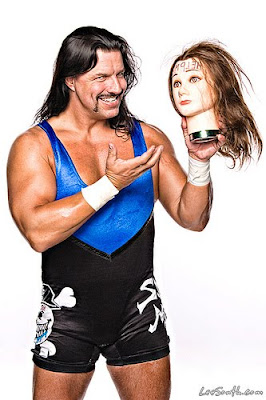 My world is small. But in reality, the world is really big and some days this truth can surprise you. 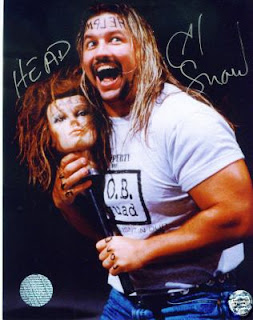 Take for example the commercial we shot this week. There I was with my sons next to an overheating car while my acting “husband” is ranting and raving over our spoiled trip. This actor husband, Barry Ratcliffe, brought along a friend, Al, to our shoot. Who has time to saddle up and watch a commercial being shot? I dunno. This kind, quiet fellow meant nothing to me other than he was that spare big body across the street with the camera crew. I asked him to (please) take photos while the kids and I basked in the glow of the camera lens. OK, it felt like a glow to us; it was a first. Al was hesitant to take my camera so I sarcastically showed him that it is easy.
“Click. Click. Ah, you can’t do click? C’mon. Click.”
He hesitantly agreed with a beautiful smile. 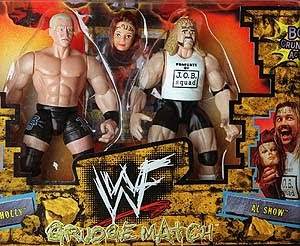 Fast forward ninety minutes. Al, my personal photographer, and most of the filming crew were out to lunch while we did our last shot of the happy family driving down the road with a car that is working Motor Silk perfect. While driving back and forth on the same road six times my “husband” and I had a chance to talk. He mentioned that his friend, Al Snow, is part of the World Wrestling Federation (WWF). He is known for carrying a head around; it is his “thing.” Sort of like my unicycle, Blanche. Everyone needs “a thing” to call their own (but a head, really? REALLY?) See, in my small world the WWF does not exist. We don’t follow or know professional wrestling stars at our house. At least not until this week. 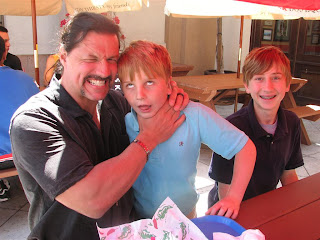 When we met up with the others for lunch at Snapper Jacks (seriously, that’s the name. Sounds like something from The Simpsons, I know), I sat across from Al. We talked religion, wrestling, drinking and drugs. He does neither of the latter two. A good influence for my young boys and I liked them to hear his spin on that part of life. We took some pictures (posted here) as he put them in what I assumed were “wrestling holds.” He shared that in professional wrestling the outcome is planned but the fighting is real, not staged at all. All this was discussed over shrimp tacos. Lunch was a fun experience with my ”hubby”, Mr. and Mrs. Motor Silk, and the filming and production people. 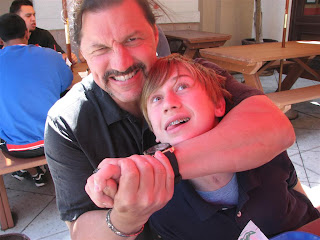 When my boys and I returned home we Googled Al Snow, curious who this quiet guy with the large arms and long black hair was.
Woah!
It was at this moment I realized that this world is REALLY big! Al snow is a wrestling giant! Who knew Al Snow is an action figure parked in the isles of Target and Toys R' Us? I laugh that we shared lunch together before he headed off (excuse the pun) to tussle and tear at large, shiny, muscled men’s body parts while thousands of fans applauded and cheered. He behaved so quiet and humble to be one of "those" beefy wild wrestling animals.
Stepping out of the comfort zone of my usual Wednesday VONS and laundry routine was exciting. I met a whole new genre of people and recalled that it really is a big world out there. But here is that same truth I always come back to. Everyone … whether a mom, professional wrestler, actor, third grader, movie maker, or large company owner … we all must keep The Balance. Harmony, peace and feeling satiated are gracefully delivered when our lives are as stable as they can be. I feel more balanced having stepped out of my routine and trying something new. In the process I met Al Snow, the quiet WWF dude who reminded me that this world is really big, but there is room enough for everybody. Even those with two heads.
Posted by UnicycleRose at 8:16 AM

That sounds like a very interesting experience. Nothing dull about that day!