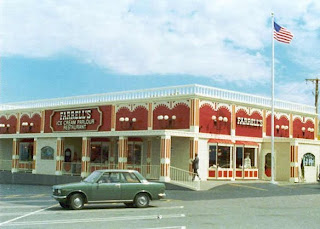 Farrell’s Ice Cream Parlor was a one-of-a-kind, sugar-filled palace that I yearned to visit as often as I could convince my parents to drive me thirty miles to The Valley (not an easy task) in Los Angeles. The first Farrells opened in 1963 in Portland, Oregon. By 1971 there were 130 restaurants nationwide. The bright red velveteen lined walls and black-and-white checked floors begged the Barber Shop Quartet singer in every child to step back in time one-hundred years to celebrate a special event or have a yummy dinner of hot dogs and French fries. Face it, we were there for the ice cream and candy. Where else could you listen to an old-fashioned player piano while eating an ice cream sundae? 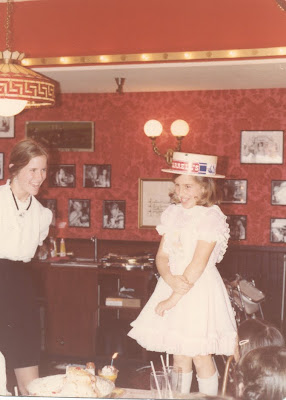 Growing up in the 70s this was the place to celebrate your birthday. Nowadays, that big rat Chuck E. Cheese has moved into that coveted spot. At Farrell’s, we would order from a turn-of-the-century style newspaper menu and my hot dog always came with a huge pickle on the side. For dessert? We ordered The Zoo on my tenth birthday. It was delivered to our table by two young men who ran around balancing a huge bowl of ice cream on a gurney-style platform with garter belts on their upper arms, pin-striped vests, old-fashioned ties and cane hats wrapped in red, white and blue. I can imagine these gents belting out “My dog has fleas” seven different ways … but at the time they were delivering what most kids wanted, the huge Zoo ice cream sundae that could serve fifteen people. This delivery show happened while I was standing on a chair, dressed in my pink gingham Easter dress (plenty of petticoats included) with a funky Styrofoam hat on my ten-year old head. All eyes were on me as the siren started to scream. This piercing “stop what you are doing and notice the birthday girl” siren rang out and everybody dropped their forks as the Zoo was paraded around the restaurant on two workers’ shoulders, then touching down at my birthday table filled with friends and family. Then everyone in the restaurant sang Happy Birthday. 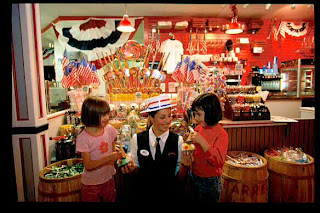 Next, the Zoo was scooped up and served. It was a Willy Wonka golden-ticket moment because all the kids wanted to be served the tiny plastic giraffe or elephant or any number of circus animals that were hiding among the chocolate and caramel, whipped topping or four different ice cream flavors. My big sister’s favorite sundae was called a Pig’s Trough which was two banana splits and served in, what else, a pig’s trough. We loved to share that! 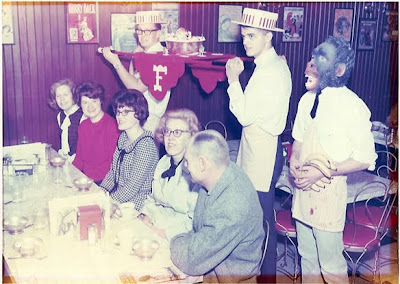 At the end of the party we visited the candy store stocked with huge colorful suckers, ginormous jaw breakers and miles of candy dots (another 70s Willy Wonka moment). We stormed this candy heaven and I picked, out black licorice, gumballs, taffy or whatever sugar version I wanted. It was so hard to make that final sweet decision (dentists must have loved this place because of all the job security Farrell’s provided).

A sad part of revisiting this pleasant memory is that today, most kids can’t imagine a good time without a screen, or battery operated toy. No longer does a colorful foot-wide sucker win kids over. Arcades, Chuck E. Cheese and Lazerstar have pushed Farrell’s Ice Cream Parlor off the celebration map. I looked into it and only four Farrell’s still remain open, and two of them are in Hawaii. Regardless, on the map of my kid heart is tattooed the fun times of this place where "old tyme memories for a new generation" were made.
Posted by UnicycleRose at 2:54 PM

Thanks for visiting my blog! And thank you for complimenting me on my photos! I enjoy taking photos and wish I could do something more with it but I guess it will take time (I just wish I had started earlier in life)!

I am so impressed with your unicycle riding!

Love this post! The pictures are just so good. It's true, it's kind of sad that kids can't enjoy themselves without crazy technology. I really want to go to a Farrell's now. I had never even heard of one. It sounds like an old fashioned (in a good way) heaven.

Farrells! We had one growing up (Northern Cal). I don't think I ever celebrated my birthday there, but I sure remember a few parties that I went to. Good times, good times.