Maybe God put a few bad people in your life, so when the right one came along you'd be thankful. ~ Andrea Kiefer ~

We attended a couple’s dinner party on Saturday night, and being the eve of Valentine’s Day the question was asked, “How did you meet your spouse?” 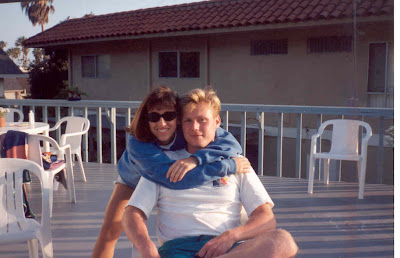 Unexpectedly, I met my Prince at my Cousin Paul’s 25th birthday party. Ralph was a bit tipsy and wore a painfully loud fluorescent Hawaiian shirt. We chatted it up and he asked me out shortly after that. Our first date we shared Italian food, laughter and then I realized that he was a Nice Guy … a handsome, true Southern Boy, with electric blue eyes and big white smile. I had not yet come to appreciate the Nice Guy; my heart had not hit rock bottom and I declined a second date with my Prince. I went back to the Meathead. Instead of analyzing why I was drawn to bad boys is not the question. The answer is that after disappointments and repetitive bad choices, I made a conscious decision to give a Nice Guy a chance. Being cheated on by a rough-around-every-edge Meathead, I’d had it! Bring on the polite, sincere Nice Guy barrage! 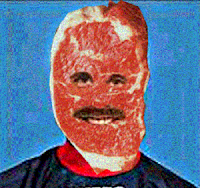 I was mentally ready to glide beyond that first date with this different breed of man. It was like charting new waters; I wonder if this is how Columbus felt? A little scared and unsure where I was headed…maybe at twenty-five years old I was maturing? Whatever it was, I hoped to pursue that Ralph fella, who was conscientious, self-disciplined, had a real job, integrity, could iron his own shirts, and possessed amazing musical talent, goofy humor, and sweet innocence. I nervously phoned him ten months after that first date, hoping and praying he was still single. He was surprised to hear from me, as he admitted he was going to call me that very same week. Freaky! 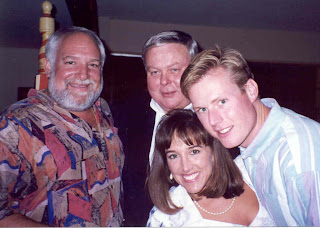 It was meant to be. Our love fell into place and he asked me to marry him eight months later. Of course, being a gentleman, he secretly asked Tary permission to marry his middle daughter. Tary was thrilled!
"Heck ya, take her, she's all yours! Now let's pour a drink and celebrate." And they did.

The photo to the left with our fathers is from the night before our wedding over fifteen years ago.  Looking back I realize, maybe God really does put a few bad people in your life, so when Mr. Right rolls along you’d be thankful. I am.
Posted by UnicycleRose at 4:32 PM