Just as They Say, It’s a Pet Eat Pet World 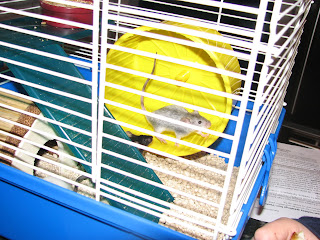 Has this ever happened to you? Our pet ate our other pet! Ack! How do you prepare for the sad face of a nine-year-old boy with this news? Um, I still don’t know. I mean, it’s sort of funny. While it’s super duper bad to my kid, I want to laugh. I hate playing it straight, when I want to cheer out loud. I’m just no good at keeping a straight face in this way.


In December, you might recall that my husband and two sons left for Petco to buy dwarf hamsters and returned with three rodents … beady-eyed-stinky mice. I figured it was a boy thing and I was outnumbered, so I did not put up a fight (but was grossed out none the less). Shadow, Frostbite and Jerry squeaked right into our lives. The kids loved to cuddle (yes, I said cuddle!) and play with them (don’t worry I make them wash their hands and arms after) … well, as much one can play with a mouse. Sara and Goldie, The Weiner Sisters, could not contain their dachshund-hound instinct and Sara’s incessant cage-side barking tempted me to feed the mice to our friend’s pet snake. But again, the kids reeealllly enjoyed their mice and I had nothing to do with mice care. Nada. Zip. This was a father-son-rodent bonding experience. 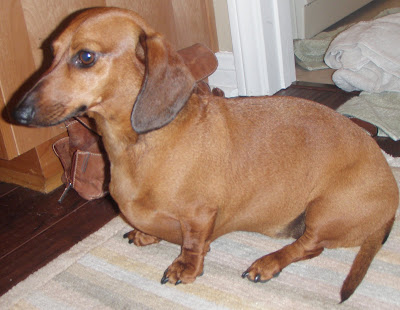 A little back story… at the park months ago, Sara caught a pocket gopher, both dogs played tug-a-war while I was freaking out. It was like witnessing a murder. I had to kick Sara (the dog to the right)  in the head a couple times before she would release the dead critter. Traumatized, I had my first hands-on experience with unstoppable animal instinct. Bad memory.
That history aside, on Monday morning we awoke to Lucas announcing the Mice cage had been overturned in the garage and the three mice amigos were MIA. Two were scurrying around under cars, and were caught. But where was Shadow? It was decided that the Great Hunting Weenie would be allowed into the garage to sniff out Shadow, and then we could swoop down and put the mouse back in her cage before Sara started snacking. This grand plan went over like a lead balloon; no luck. The day went on.
Later that day, we found Shadow AFTER the Great Hunting Weenie. Sara ate Shadow. Maybe ate is not the correct word, more like chewed on Shadow like a teething ring, then dropped her on the tile floor; a sad moment for a nine year old who deeply loved the killer and the killie. He cried and when I put him to bed, he cried again.
Crying was not part of my personal Pet Eat Pet story. All I could think is one dead, two to go! Hmmm….maybe, I should let Sara hang with the mice more often. No, I wouldn’t do that. I am just thinking out loud. Toodles.
Posted by UnicycleRose at 11:58 PM

Oh, I found a picture! She's cute. Wow...you must be something special to have mice as pets! I don't blame the dog. Ours find them in the field all the time too! Yuck!

Oh, I found a picture! She's cute. Wow...you must be something special to have mice as pets! I don't blame the dog. Ours find them in the field all the time too! Yuck!

oh, so sad! I guess you just can't get past the instinct for those dogs...I feel so bad for your boy. When I was in college, my cat got into my sister's room, overturned her finches cage and ate one. I felt so bad.

I have to tell you I love your unicycle! When I was 9, my dad got me a real unicycle for my birthday, I learned to ride it well. I get the longing once in a while to try one out and see if I still could do it, but you don't see any lying around, kwim?? Very cool pic of you!

much grace and peace to you,